Here’s an exchange on Twitter from last night that I think helps illustrate that not all unions supporting Minneapolis mayoral candidates are equal. For example, I’m a pretty big fan of SEIU, who fights for things like increasing the minimum wages to help service workers inch toward financial indepence. SEIU supports Betsy Hodges for Minneapolis Mayor.

However, in the example outlined below, the person I was engaging with supports spending hundreds of millions of dollars subsidizing huge private corporations in order to create hundreds of construction jobs for a few years.

Jason George is the Legislative and Political Director at International Union of Operating Engineers Local 49: 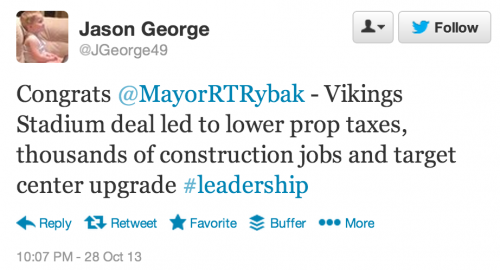 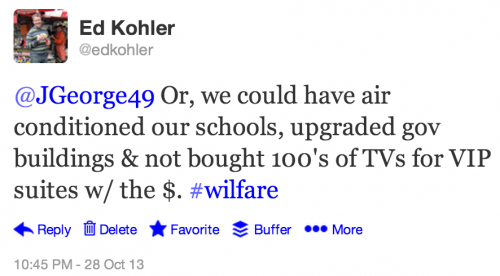 Jason George seemed to think that the ONLY thing that could be done with the money collected from a series of downtown entertainment taxes and a city-wide sales tax is to subsidize the Wilf Family of Fraudsters for the benefit of construction unions:

So, I explained that we must be living in different realities: 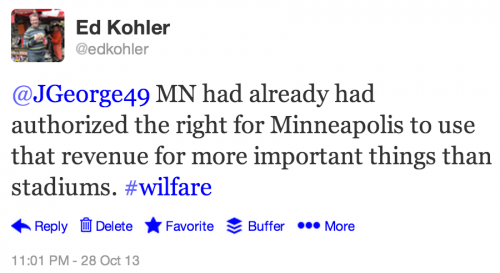 Here’s a report on the reality I’m living in from Eric Roper in the StarTribune:

Mayor R.T. Rybak has repeatedly said the city needs the Vikings stadium deal to get control over the sales taxes that would fund the stadium, Target Center improvements and property tax relief. But a state lawmaker says the city already has control.

Rep. Diane Loeffler, a DFLer who represents Northeast Minneapolis in the Minnesota House, grew uneasy at Rybak’s stadium forum Wednesday night as the mayor insisted that he has no control over those taxes. Loeffler says in 2009 she authored successful legislation giving the city exactly that power.

“That why I kept raising my hand and I knew he’d ignore me because he didn’t want me in the front of the crowd to correct him,” Loeffler said.

Jason George went on to explain that the city’s going to be rich once we’ve subsidized the Wilf Family of Fraudsters and one of Minnesota’s richest businessmen to their satisfaction:

But, here’s what I asked: 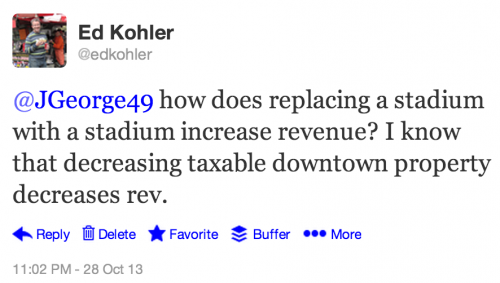 Clearly, I was mistaken from Jason George’s perspective: 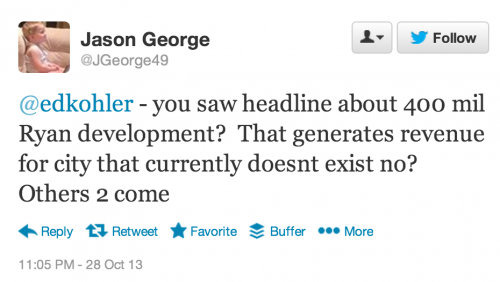 Is the new Vikings stadium honestly spurring development? Let’s say that you’re a company that would like to relocate downtown and is looking for a relatively large piece of land to do so. Where, outside of right next to the stadium, could they do that? Nowhere. 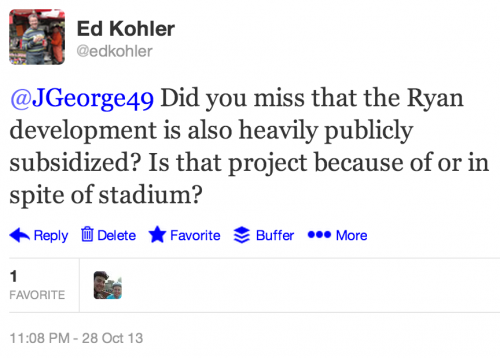 As you can probably imagine, the kind of person who’s willing to justify corporate welfare projects as jobs projects is a big Mark Andrew supporter. This is the same Jason George who recently gave a speech titled “Labor on Energy- Creating Sustainable Middle Class Jobs and the Fight with Environmentalists” at a Koch Brothers’ funded anti-environmental event. A union leader who recently attended a climate change denial forum to give speech about fighting environmentalists is backing (and putting boots on the ground) for the self-described green candidate in the Minneapolis mayor’s race. 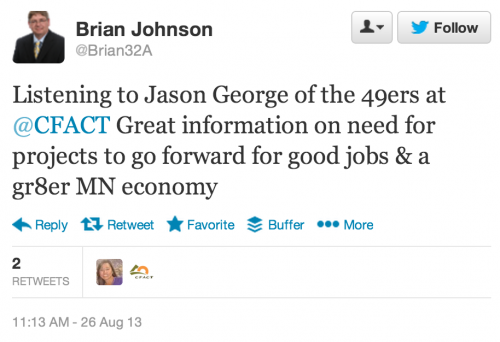 I can see why environmentalists and economical politicians could be a threat to the 49ers. For example, if half as much money was spent refurbishing the Metrodome (a far greener approach than tearing it down to build a stadium that’s twice as large), the 49ers would likely see less work from the deal. What’s good for the 49ers, in this case, may not be what’s best for city tax payers or the environment. And Mark Andrew is their candidate of choice.

As I see it, all mayoral candidates are pro-development. Everyone wants to see the city grow and prosper. But, the candidates do vary in how much public funding should be dumped into projects that the private market can’t justify (or, doesn’t need to justify due to politicians being overly generous with other people’s money) on its own.