Judd Zulgad from 1500ESPN tweeted a few observations during his trip to Lambeau Field, including the one below regarding revenue captured on-site at Lambeau Field compared to the Metrodome: 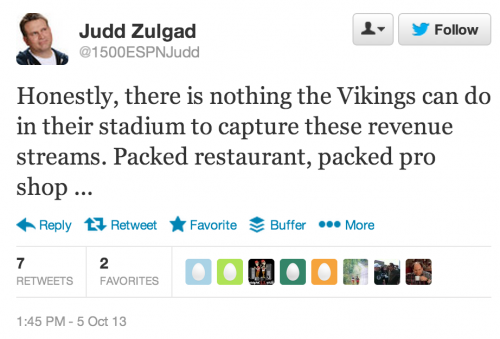 But, who’s problem is that? Based on how Minneapolis chose to fund a huge chunk of the Vikings stadium corporate welfare package, locally owned restaurants, bars, and concert venues are responsible for helping the NFL capture more revenue from people who visit downtown Minneapolis 10 times per year.

It’s odd to see businesses forced to fund their own competition but that’s what the city agreed to.