One thing that stands out to me is the difference between the “all crimes” map and the visualizations of different crime categories. Here’s the all crimes version: 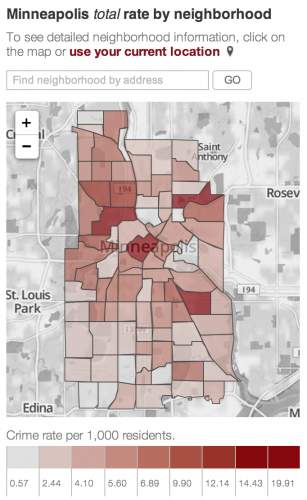 And here’s that map filtered for just Aggravated Assaults: 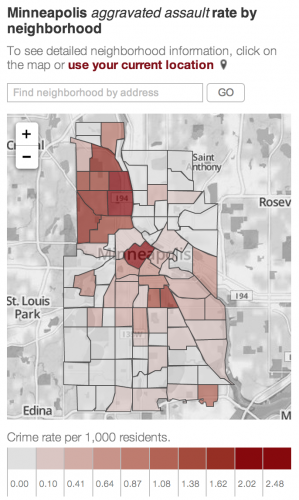 One reason for the difference is the high quantity of reported shoplifting cases at Target stores. At the time I wrote that, a commenter mentioned that it may not be that Target’s better at catching shoplifters, but that they’re more likely to prosecute every shoplifting incident, which creates a burden for our police and courts, while also creating criminal records for people who are already having a hard time. That makes some sense. It’s not like Target security could tell a shoplifter “we never forget a face, so the next time you come in here, one of our interchangeable Targetrons will notice”. They’re also high-volume stores with some of the most sophisticated security systems available, so their catch-rate is likely higher than stores that aren’t staffed with casino-style cameras.

As I toggled through the various crime categories on the maps, I thought about which category of crime may tell the most about the challenges a neighborhood faces. Larceny doesn’t seem to be it, since one could live right next to a Target store (high larceny rates) without feeling any impacts of the higher than average larceny rates. Homicide seems too rare to rely on for trends. Aggravated assault, to me, seems like a decent fit for judging neighborhood safety. Areas where people are getting in fights, dealing with domestic abuse and child abuse seem less safe to me.

Looking at the aggravated assault map, there were no reported aggravated assaults from Lake of the Isles leading south through the chain of lakes, then east along the Minnehaha Creek, along Nokomis & Hiawatha, and all the way to the falls. And northern Northeast Minneapolis is its usual quiet self. Downtown ranks high but that’s likely skewed by the warehouse district. Morris Park, down in the SE corner of the city, ranks high due to the action on Bossen Terrace and Sander Dr (concentrated public housing, I believe).

What do you think? Is aggravated assault a decent indicator of neighborhood safety?