David Shaffer has a story in the StarTribune about Xcel’s proposed rate increases. It sounds like Xcel wanted to increase rates by 10.7%, but it’s going to end up somewhere closer to 5%.

But, one thing that stood out to me was a denial of Xcel’s request to bill ratepayers for the increasing costs of dirty power sources:

The judge also concluded that Xcel shouldn’t be allowed to immediately bill ratepayers for some of the escalating costs associated with upgrading Xcel’s 42-year-old Monticello nuclear power plant or its expenses related to a catastrophic 2011 accident at its giant coal-burning plant in Becker, Minn.

If the cost of dirty power is increasing, shouldn’t those who choose to use dirty power feel that pain? In addition to the long term costs to the air we breath, there are real costs to maintaining carbon belching and nuclear waste generating plants.

This reminded me to take a look at my Xcel bill to get a feel for how much I’m currently paying to avoid dirty power by using Xcel’s Windsource program. As of now, the cost is higher, but take a look at how much: 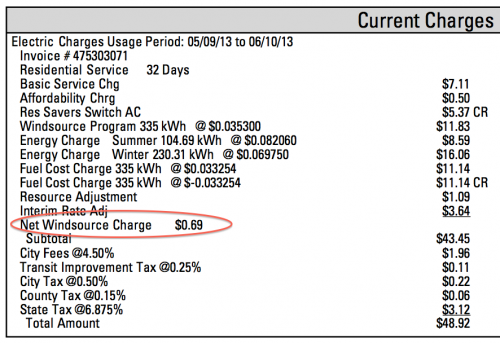 69 cents over a month. After taxes on that net 69, I paid around 77 cents extra to rely upon wind over dirty power. That’s not breaking the bank.

And, you know what would close that gap even further? Letting Xcel charge dirty power users for the costs of maintaining their dirty power plants. Eventually, that WindSource net energy cost could go negative, and that’s when people who don’t care enough about the air we breath to pay an extra 1.6% for power will go green based solely on cost.