I received an alert from Minneapolis 311 today about a graffiti report I sent in yesterday. Good news. The report had already been closed. 24 turnaround. Very cool: 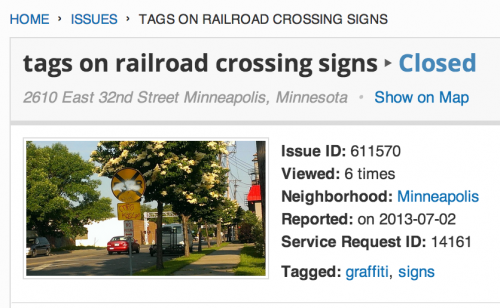 But, when I looked closer, I saw this:

Hmm, it was closed because it was a duplicate. It turns out that someone had already reported that tag. So, I took a look to see if I could figure out who reported it. You’d think that this would be easy because 311 provides a case number, but that case number doesn’t actually work on the public facing website. It appears to be for an internal tracking system, so it a worthless piece of information for me.

Still, I did manage to track down the previous report. It turns out that I was the person who previously reported those tags: 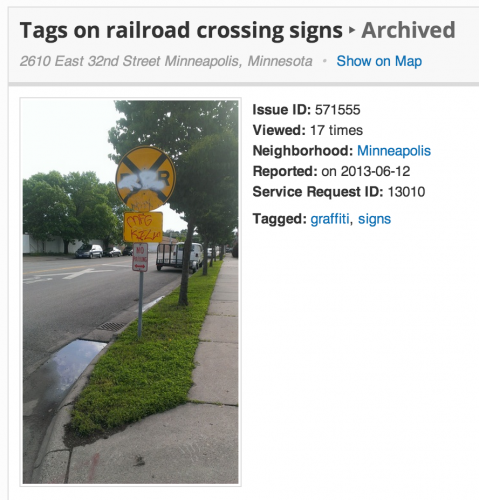 That report shows that I initially reported this tag on June 12th. So, I suppose it makes sense that they’d mark the report I filed three weeks later about the same tags as a dupe. But, then I noticed this:

It turns out that the graffiti report I sent in on June 12th was closed on June 20th and marked as resolved. But, based on the report I made on July 2nd, either taggers made identical tags to those signs between June 20th and July 2nd, or Minneapolis 311 marked a case as resolved that clearly was not.

Does anyone have any insight into how this happens at 311?

One thought on “An Example of Minneapolis 311 Dropping the Ball”