This picture isn’t the greatest since it was taken by me in a moving car at night on a cell phone after a few beers. Still, check out how cool this stadium looks at night: 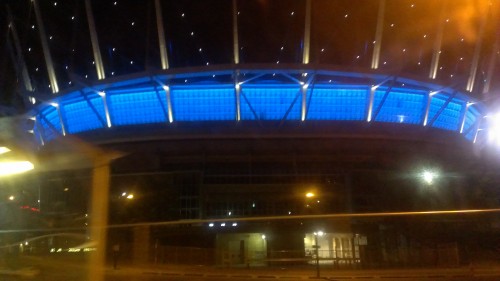 That’s Vancouver’s BC Place stadium. That’s the stadium that used for the Opening Ceremonies of the Winter Olympics, for the BC Lions CFL football team, for the Vancouver Whitecaps MLS team, and for the largest concert tours in the world, including Taylor Swift & Jay Z + Justin Timberlake. This is a first class venue both inside and out, both day and night.

And, the truly innovative part of it is that they managed to build a world class venue for half the price Minnesota is spending to tear down the Metrodome to build a slightly larger stadium on the same footprint. Vancouver decided to be take a far cheaper and greener approach when they came to the conclusion that their Metrodome-equivalent stadium was due for an upgrade before the Olympics.

They managed to add better seats, better concessions a retractable roof, open the stadium up with more natural light, keep the football team playing in the stadium by doing the upgrades during off-seasons, and did it on half the budget being used to tear down and rebuild a stadium in Minneapolis. If Minnesota had taken a similar approach there wouldn’t have been a need to come up with a creative way to finance the stadium through questionable gambling exploitation tactics.

Functional world-class cities aren’t judged by the amount of taxpayer money they can spend to subsidize private corporations. If they can solve a problem with less money, they do. That’s good government. New York spent nearly nothing on the NFL stadium that’s shared by two teams in their market. Los Angeles profits from not having an NFL team draining their city’s tax base. Then there’s Cincinnati, where NFL subsidies have become a higher budget priority than local hospitals. It’s no wonder that they’ve lost 5% of the county’s population over the life of the current stadium. People with marketable skills have options.