This chart from Pew Research (via Erica) raises some interesting points. 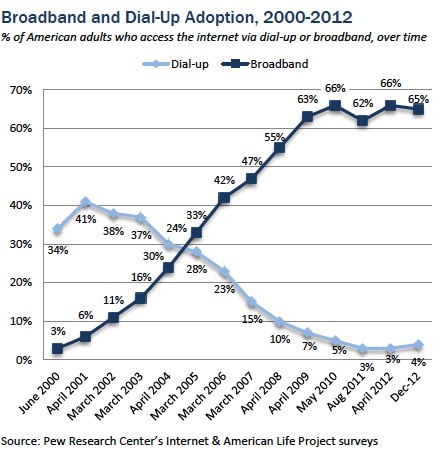 I know people who are part of the 30% of non-broadband or dial-up crowd. They have:

– great bandwidth at work, don’t want to spend $50/month for internet so they can spend their evenings on the web too.

– Coffee shops, bars, and restaurants with great WiFi nearby.

That may account for some of the no internet at home crowd (and perhaps why home broadband penetration seems to have plateaued), but that’s far from everyone. Many people who could really use access don’t have it and don’t have easy access to it nearby (or a job where they can do some web surfing that would improve their lives [smarter shopping, finding a new job, learning a new skill, finding out what their kids are up to on social media]).

I recently ran into a woman from Somalia at Marshall & Lowry across the street from Tony Jaros’. She was looking or Snelling Ave. As in, she took the wrong bus from Riverside and found herself in NE Minneapolis instead of the Midway area of St Paul. She had a dumb phone, and was attempting to find an organization that provides free/cheap computers to people in need. I pulled out my Android phone and showed her a map of where she was vs. where she meant to be, then showed her the bus options to get there. Then offered to call her an Uber.

I’ve done exactly what she did (taken the wrong bus). But, I have the resources in my pocket to recover from my mistakes far easier than she does (and, to realize things are off quicker since I can see myself move on a map in real time when I’m on a bus). She’s not stupid (we all make mistakes like that), but her access to information is far different than mine.

Multiply that by the dozens, if not hundreds, of internet enabled decisions one makes throughout the day when armed with the technology, and it’s pretty clear that people without the internet in their home or in their pocket are going through life with some major hurdles that could be easily removed if we wanted to level the playing field.

Personally, I support the Dig Once Executive Order and would like to see fiber installed in every street in the country as streets are rebuilt (and hopefully faster than that). Use of information changes dramatically based on access to information, and access to information varies from virtually inaccessible to painfully barely accessible for far too many people.