Here’s an interesting exchange with Pat Garofalo regarding Vikings stadium funding through e-pulltabs: 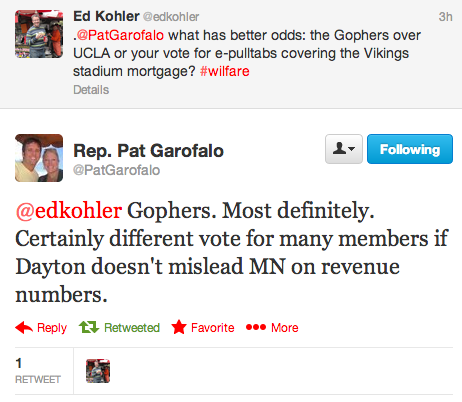 So, it’s Dayton’s fault. Dayton duped Garofalo into believing that e-pulltabs would work as a financing source for the stadium? Why would Garofalo believe Dayton on this issue when he doesn’t seem to trust Dayton on anything else?

Also, why would Garofalo believe the numbers? He would have had access to this fiscal note (thanks to Tim Nelson for posting) explaining the projections:

Garofalo would have received data that showed projections were based upon 2,500 bars having e-pulltabs, with the average bar having 6.16 devices earning $225/day. 15,400 devices sucking $519,750 out of Minnesotans every day for 30 years for the benefit of the Minnesota Vikings (together with the e-pulltabs vendors, the bars, and a bit for a charity, such as the Minnesota Licensed Beverage Association’s charitable wing). He also would have learned that e-BINGO projections were based upon 1,500 venues with an average of 4.62 devices would suck an additional $93,555 out of Minnesota’s BINGO crowd every day of the year for the next 30 years.

Minnesotans would have to lose $613,305 PER DAY EVERY DAY for the Vikings stadium financing projections through e-pulltabs and e-BINGO to work, and Pat Garofalo had access to this information. Still, Pat Garofalo claims that he was duped by Mark Dayton.