Electronic pulltabs seem to be underperforming in a variety of ways. Here are some examples.

Tim Nelson at MPR’s Stadium Watch blog has been following the stadium construction project from every angle. While the construction side of things seems to be moving along rather smoothly, the financing side feels like a slow motion train wreck to me.

Here are the assumptions that went into convincing the legislature that gamblers could be exploited at a high enough level to pay $348 million plus interest share of an NFL subsidy:

They also mentioned that having e-pulltabs running in 2,500 bars was a conceivable goal by October 2013.

To hit 2,500 active venues by October, they’ll need to install nearly 200 per month. As of Feb 15th, 168 locations have games installed. Here’s a look at how those two compare: 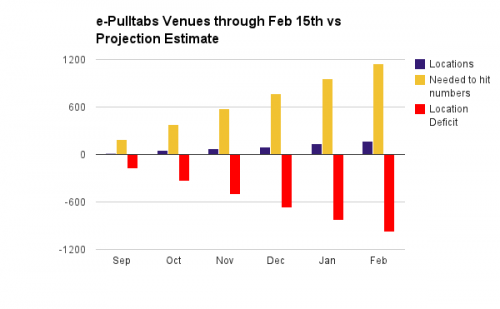 How about revenue per device per day? The devices had a nice honeymoon with Vikings fans/lobbyists showing up at O’Gara’s for the launch of their ticket subsidizing devices. However, the honeymoon appears to be over: 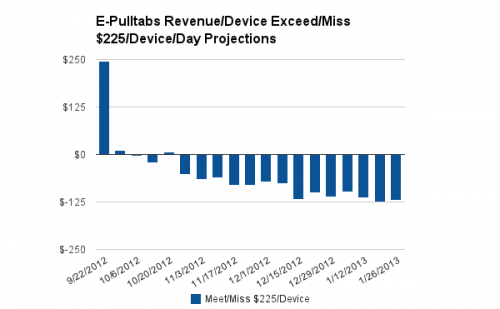 How about revenue per day per location? The goal is $1,400. That was exceeded during the honeymoon phase, but then: 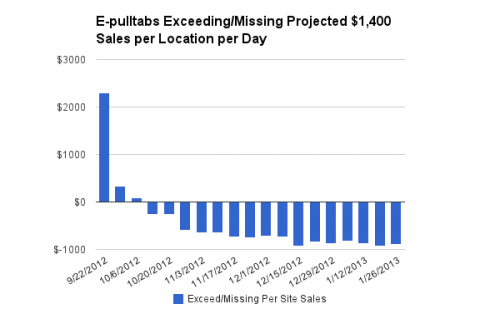 Only 8 venues met or exceeded the $1,400 in revenue per day projection in January. Among those who did not

If revenue per device and revenue per location isn’t hitting projections, perhaps that could be solved by increasing the number of devices per location? This, of course, assumes that revenue is being held back due to eager e-pulltabs players being unable to lose money due to all devices being checked out by other gamblers. But, I get the impression that demand is not beating supply based on the trend in devices per location: 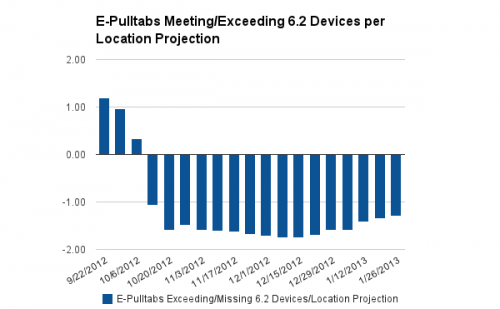 Some of the top performing locations only have 4 devices, which may support my theory that the only way e-pulltabs will work is if they become attractive to problem gamblers. Interacting with an iPad (or similar) device isn’t a social activity. Perhaps e-pulltabs will do better if vendors focus less on sports bars and more on day drinking establishments? For example, Porky’s Bar on Payne ranked #2 for e-pulltabs revenue in January, so we’re literally taking money out of St Paul’s East Side to subsidize Zygi Wilf’s Park Ave condo.

Which bar is #1 in the state for subsidizing the NFL’s interest in rebuilding stadiums every 30 years with other people’s money? Harry’s Bar in Hill City, MN:

If revenue settles in at the current rate per device and bars decide that five devices are plenty, the number of venues needed to hit revenue projections is far higher.

Or, worst case scenario, bars will decide that it’s not worth the effort to deal with e-pulltabs infrastructure, training, and space allocations at these revenue levels and drop this program.