RT @expressgamesus: @edkohler – thanks for playing e-pulltabs! // I doubt I ever will again. They’re boring and a waste of money. #wilfare

The state of Minnesota is off to a slow start in their effort to extract tens of millions of dollars from gamblers via e-pulltabs for the NFL’s benefit. This is partly my fault because I’m up $4.50 after the one game I played at O’Gara’s in October.

There’s a name for repetitively clicking stuff on a computer: work. I prefer doing this type of work for a salary rather than Pavlovian rewards.

E-pulltabs have an 85% payout under current laws so an average dollar bet returns 85 cents. The majority of the other 15 cents goes to corporate Wilfare for the Vikings and the device vendor. A small fraction goes to a local charity and the bars where the games are played.

If you plan to spend some time losing 15 cents per hand while drinking a beer, how much can you expect to lose? That comes down to how fast you can play. Once you’re familiar with the games, it seems reasonable that you could play a hand every 15 seconds (probably faster). At 15 seconds, you’ll lose 60 cents per minute on average or $36/hour.

Here’s a breakdown of how much money you can lose per hour based on a variety of bets and gambling rates: 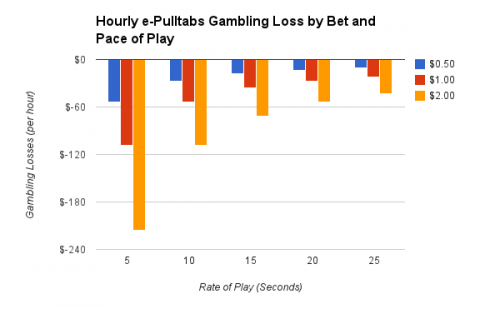 If your goal is to lose at least $50/hour, you have some options: $2 bets every 20 seconds will get you there. You’ll need to up your pace to 10 seconds to lose that much at $1 per hand. And, with enough focus, you could lose $50 in an hour at 50 cents per hand if you maintained a 5 seconds per hand pace (around 700 hands in an hour! Don’t forget to blink!).

Here’s a guy who wants to lend a hand (A few hundred hands? Thousands?):

.@govmarkdayton As a #vikings fan, I want to pay my fair share. Where can I find Vikings Stadium pulltabs?

Let’s assume that Loren is willing to lose $100 for Zygi Wilf’s gain. At $1 per hand, it will take Loren nearly two hours to do so. Once Loren’s parted ways with his Benjamin, how much will go toward debt payments on the state’s stadium commitments? $36.

Loren would need to spend two hours of his time to lose $100 in order to generate $36 in stadium financing revenue. $25 goes to the pulltab vendor. $20 to a local charity, and $15 to the bar. I don’t know how much respect Loren has for his own time and money, but there may be easier ways to give money to the state to help pay for a Vikings stadium than this.