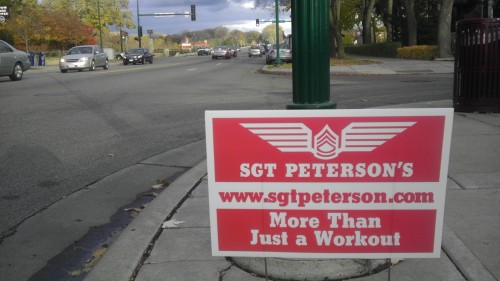 In July 2011, Tim Peterson emailed me a bunch of times saying things like:

I respect you standing up for what you believe in.
Many of the things you and the other guy post are inaccurate at best.
Please remove the poor things that you say about me and my company.
Thank you and have a great day!

He proposed a “win win” solution which involved me removing the truthful statements I made about his illegal advertising. I didn’t. Instead, I wrote to Tim on July 8, 2011 saying:

Tim, the win win solution here seems very clear to me. I only write about your illegal snipe advertising when you advertise, illegally, with signs on boulevards around the city. If you didn’t do that, I wouldn’t write about it.

All you need to do to solve this problem you’ve created is to stop doing what you know very well that you shouldn’t be doing.

That was the last I saw of Sgt Peterson sign spam until this week. However, it wasn’t quite done last year. It continued a bit longer in Aric’s part of the city, which lead to a StarTribune report about the poor business practices Tim Peterson continued to make even after being asked to stop repeatedly: 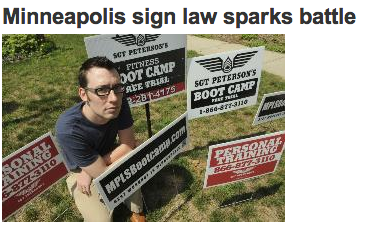 But, it turns out that Tim Peterson can’t help himself based on the snipe sign I found and removed from East Lake Street this week.

With so many businesses offering fitness classes in Minneapolis, it can’t be hard to find one that doesn’t litter in our city.

* This post title is designed to reach and inform prospective Sgt Peterson’s Boot Camp Groupon buyers about the history of the business they are researching before purchasing a Groupon.