E-pulltabs are up and running. I tried one at O’Gara’s. Our local gambling exploiters, ExpressGames, asked me what I though on Twitter. I told them:

RT @expressgamesus: @edkohler – thanks for playing e-pulltabs! // I doubt I ever will again. They’re boring and a waste of money. #wilfare

E-pulltab distributor says nearly 40 sites in MN are up and running, making more money than initially projected on a per-device basis.

Is forty venues good? Marlys Harris at MinnPost reported how many active venues offering electronic Wilfare collection machines in order to cover the money the state has borrowed to subsidize the NFL:

Minnesota’s Revenue Department moreover based its estimate on assumptions that may or may not hold. Among them: 1,500 sites would offer electronic bingo, and 2,500 would install pull-tab machines.

At the current rate of less than 1.5 new venues/day joining getting into the electronic pull-tab gambling exploitation business, it will only take another 4.5 years to reach the levels needed to cover stadium debt obligations without tapping into the general fund. Has any venue launched electronic bingo yet? As far as I can tell, we’re 0/1,500 on collecting money from through bingo for Vikings stadium Wilfare.

If you’re the kind of person who DOESN’T consider playing pulltabs on an iPad extraordinarily boring, here’s where $1 in goes out:

If a decent percentage wasn’t returned as winnings, you wouldn’t see much interest in e-pulltabs. But, clearly, there need to be losers so Zygi can be a winner. Here’s a closer look at who wins as you lose: 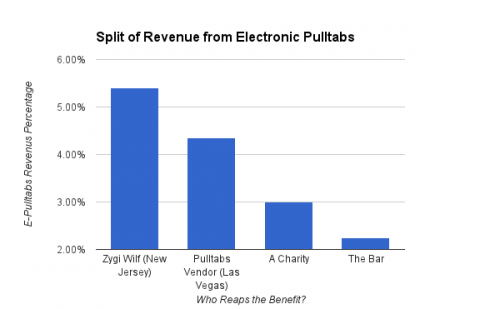 While talking about e-pulltabs with the bartender at O’Gara’s, he said that this helps support a good cause. I’m not sure what charity O’Gara’s pulltabs supports, but I do know this:

For every $1 that goes to support that charity, $1.45 goes to the e-pulltab vendor.

For every $1 that goes to an actual charity, $3 goes to support for-profit companies.

Call me crazy, but I think there may be more efficient ways to give money to charities than to give $3 to the NFL, an Las Vegas e-pulltabs gaming company, and a bar for every dollar that goes to charity. It’s costing you $4 to make a $1 donation.

Plus, if you simply donated your own money to the charity of your choice, you could deduct the contribution. After deductions, straight up donating a dollar to charity costs less than a dollar.

If donating to subsidize Zygi Wilf’s wealth is important to you, I’m sure you could send a check to Winter Park to help the guy out. Or, but a brick at the new stadium. How are those brick sales coming along?