I noticed the other day that Senator Amy Koch has blocked me on Twitter. I find that kind of humoros considering how few interactions I’ve had with her on the service. I’ve mentioned Amy Koch on Twitter five times. Three tweets were related to the Vikings stadium. The other two are displayed below.

The nice thing is that my limited number of tweets make it fairly easy to pin down what must have pissed her off enough to block me.

For example, it could have been this tweet I mentioned Amy Koch in back in December after Amy Koch lost her position as Senate Majority Leader and announced that she planned to not run for reelection. It was then revealed that she was carrying on an “inappropriate relationship” with a staffer (indeed). 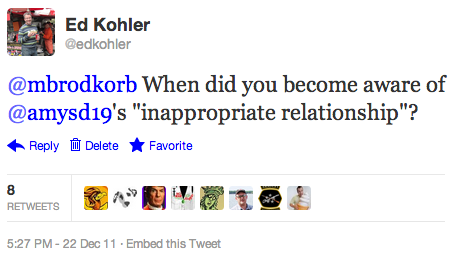 As that point, everyone knew it was Brodkorb but no one is the press was willing to say so, so I decided to ask him. That did not elicit a response from Brodkorb or Koch, but we did eventually confirm that Koch was hooking up with Brodkorb when Brodkorb decided to sue for a boatload of taxpayer dollars over HR issues related to his affair with Koch.

But, that’s not what led to Amy Koch blocking me. She didn’t do that until recently. And, since I’ve only sent one recent tweet that mentions Koch, I think it’s safe to assume that this is the tweet that pissed her off: 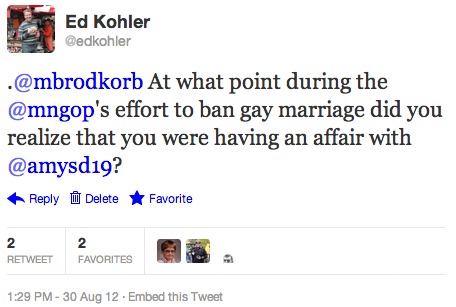 Gay marriage banning bigot, Senator Amy Koch, doesn’t seem to like having her straight marriage hypocrisies pointed out on Twitter.

Why can’t a married senator have an affair with a married senate staffer without someone pointing out that this particular senator was simultaneously working to constitutionally ban the government’s ability to recognize gay marriage? Life can be unfair to the unfair, I guess.

Granted, what Senator Koch and Michael Brodkorb did was done between two consenting adults.

Perhaps we should just stay out of that too, Senator Koch?

Senator Koch, I encourage you to stay out of the personal relationships of consenting adults in Minnesota by voting “NO” on the marriage constitutional amendment.