2. The second tweet of all time sent by @t_junior39 / @i_heart_wilfare was a link to Divine Goddess Jessica’s worship website. That tweet has also been removed within the past 24 hours.

Here are those tweets from a PDF of @t_junior39’s tweets that I logged on September 22nd: 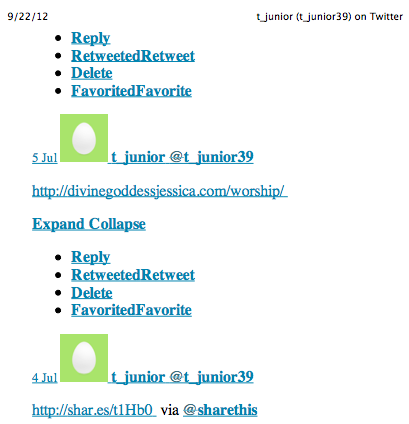 It’s interesting to watched tweets get scrubbed within 24 hours of my previous post by a guy who claims to not read this website. It could be coincidental. It could be a Twitter glitch (we can assume that if they reappear).

As I said yesterday, “He claims that he never reads this blog, and never plans to, so if his word is good he’ll never read this blog post.”