Back during the Vikings stadium financing debate, a Vikings Wilfare fan in Minneapolis named Tom [Last Name Witheld at Tom’s Request] went way over the top with his behavior toward me. Subsidizing the NFL with other people’s money was very important to Tom. In fact, it still is based on what you’ll read below. I won’t get into the details today, but Tom’s behavior was bad enough to warrant filing a restraining order against him. We came to terms in mediation on July 3rd. This post is about Tom’s recent behavior in light of the fact that he agreed in writing to never contact me. This may also give you a taste of what I was dealing with at that time.

As I mentioned in an earlier post, Jake Wyffels seems to think that it’s bad government to subsidize sedentary sports entertainment. There’s nothing wrong with sitting around watching football from time to time, but is this really the type of behavior that the government should be subsidizing? If people value watching NFL football, shouldn’t the market be able to cover the costs? Apparently not, based on the decisions made by our state’s legislature, Gov. Mark Dayton, the Minneapolis City Council, and Mayor RT Rybak.

Another person who thinks Jake Wyffels is making a mountain out of a molehill is an anonymous Twitter user who goes by the username @t_junior39: 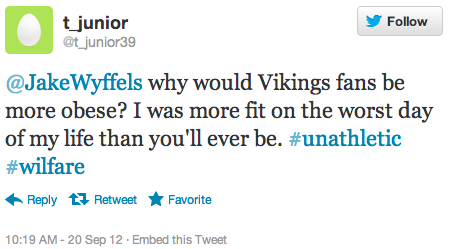 It’s amazing how rude people can be when they are posting anonymously.1. For example, how many people would tweet stuff like this under their own name: 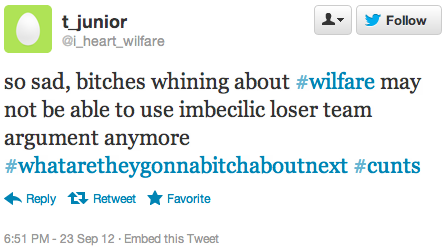 Notice that between when he sent each of those tweets @t_junior39 changed his Twitter username to @i_heart_wilfare. Anonymous, offensive, inconsistent, and proud of redistributing the state’s wealth to the NFL in order to subsidize his private entertainment.

It turns out that not all anonymous Twitter users are created equal. For example, here are some interesting nuggets about Twitter user, @t_junior39 / @i_heart_wilfare:

2. When not tweeting about his love of exploiting gamblers, taxing people buying diapers in Minneapolis (and folks grabbing dinner or a beer in downtown) to subsidize the NFL (and his entertainment) @t_junior39 / @i_heart_wilfare seems to enjoy following dominatrixes on Twitter who specialize in foot-worship. 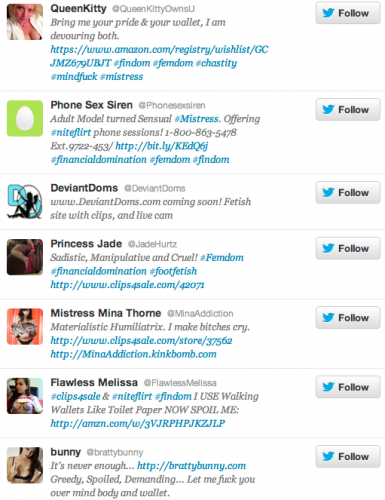 3. Coincidentally, it looks like @t_junior39 / @i_heart_wilfare set up his twitter account one day after I had a court hearing with a Vikings Wilfare fan regarding a restraining order I had filed against him. Out of more than a million Vikings fans, only one fan reached a level of inappropriate behavior that justified filing a restraining order. He has deleted his previous Twitter account.

5. On September 20th when I tweeted this: 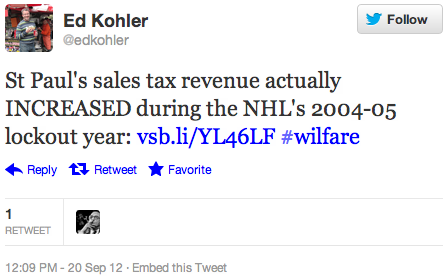 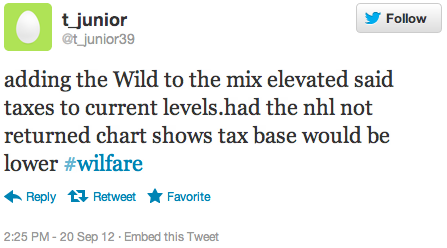 which, if you knew what the guy I filed a restraining order against does for a living – as I do – one would realize that this is a very in-character tweet for him.

6. Under the terms of the agreement we reached in a mediation session, I told him that I planned to blog about his inappropriate behavior. He pleaded with me to not use his name or mention the company he works for when I described his behavior. I agreed to not mention where he works, his last name, or the Twitter handle he used to harass me (one of a variety of channels he used to harass me) in exchange for him never contacting me again. Based on his behavior in #5 above, it looks like he may be testing the boundaries of the contract he signed at the Hennepin County Courthouse on July 3rd.

He claims that he never reads this blog, and never plans to, so if his word is good he’ll never read this blog post. But, assuming his word isn’t as good as he claims (which seems plausible) I hope he’s thought through the downside of violating the contract he signed in July.

1. Having met this guy, he shouldn’t be calling Jake “unathletic”.