I really like this story about Paul Ryan incorrectly claiming that he ran a marathon more than an hour faster than he really did. He claimed to have run a sub-3 hour marathon while actually running a bit over four hours.

To put this into perspective, here’s a distribution of finish times for the London Marathon in 2010 from Foot4ward.co.uk: 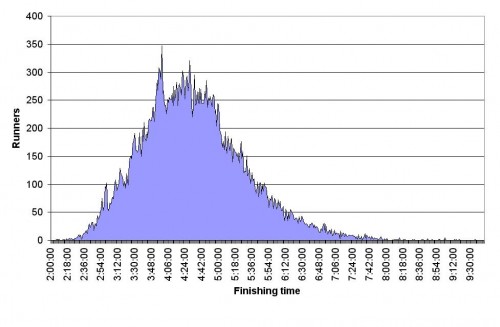 It turns out that Paul Ryan ran the 1991 Grandma’s Marathon, which had 3,221 finishers that year. The more than an hour difference between Ryan’s memory and reality would have moved him ahead of around 1,000 finishers.

How does someone like Ryan mistakenly shave more than an hour from his time? To me, the answer is obvious: while Ryan is clearly a a physically talented person, he couldn’t have put much effort into marathon training in order to run a time that slow. (I realize that even a 4-hour marathon isn’t slow [it’s still in the top-half of finishers], but it would be for someone who’s physically talented who applied their talent.)

If you don’t try, then end up with an average result, the experience isn’t all that memorable.

If you try, then end up with a great, average, or poor result, the experience is memorable.

If you run a marathon fast enough to qualify for the Boston Marathon (at the time, the cutoff was 3:10 for Ryan’s age class) you remember because you’d need to try to do that. I speak from experience, having run a Boston qualifying 3:08 at Grandma’s in 1992.

When I look at Paul Ryan’s ongoing problems with the truth (or, as the AP embarrassingly described it, making “factual shortcuts”) I see similar reactions to his statements from other groups.

With running, runners at Letsrun.com have been having fun with Ryan’s statement. For people passionate about running, this is pure ridiculousness.

But, the same thing seems to be happening with other groups who are passionate about topics that may have more to do with being Vice President. For example, Nobel Prize Economist Paul Krugman has been poking fun at Paul Ryan’s budget ideas for more than two years:

The nonpartisan Tax Policy Center has, however, stepped into the breach. Its numbers indicate that the Ryan plan would reduce revenue by almost $4 trillion over the next decade. If you add these revenue losses to the numbers The Post cites, you get a much larger deficit in 2020, roughly $1.3 trillion.

And that’s about the same as the budget office’s estimate of the 2020 deficit under the Obama administration’s plans. That is, Mr. Ryan may speak about the deficit in apocalyptic terms, but even if you believe that his proposed spending cuts are feasible — which you shouldn’t — the Roadmap wouldn’t reduce the deficit. All it would do is cut benefits for the middle class while slashing taxes on the rich.

That’s Krugman’s way of saying “you can’t be serious”. While Ryan is serious about his plan, his plan appears to be about as serious as his training plan for the 1991 Grandma’s Marathon and would likely lead to similar results.

Taking shortcuts can lead to criticism. Check out the crap President Obama is receiving from beer aficionados regarding his home brew recipe:

Again, @barackobamadisappoints true believers. Seriously, a malt extract instead of mashing your own, Mr. President? m.whitehouse.gov/blog/2012/09/0…

The difference here is that Obama never claimed to be doing something he wasn’t, and is probably open to suggestions on how to improve the White House’s home brew in his second term. The truthful story – home brewing White House – was great without “factual shortcuts”.