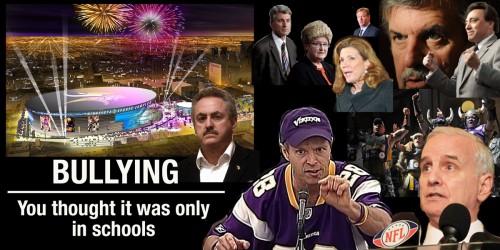 Thanks to Deets reader, Bryan, for this graphic.

When Vikings stadium wilfare queens demand other people’s money to subsidize their game day experience to the tune of $77/ticket, and people in the reality based community say “no”, things can get ugly. For example:

Governor Dayton claims to be working on this in the schools:

DFL Gov. Mark Dayton has asked the group to study the bullying problem in Minnesota schools. The task force is expected to take testimony from parents, teachers, bullying experts and students who have been targeted by bullies. Dayton even wants the task force to better define what bullying, harassment and intimidation mean.

While bullying is a problem in Minnesota’s schools, the problem doesn’t stop when people graduate or drop out.

The Vikings are popular with a group of Minnesotans, but not popular enough for them to spend their own money subsidizing a bully from New Jersey who’s threatening to pack up and leave if we don’t commit to meeting his $1.6 billion in corporate welfare demands over the next 30 years. The bullying Vikings fans seem to believe that the best thing the public’s money could be spent on is subsidizing the $77 per ticket they are unwilling to pay for Vikings games. And, if you don’t like that, leave the state.

Is Minnesota “A Better Minnesota” if it caves in to demands from bullies for $1.6 billion in corporate welfare lunch money over 30 years?

It’s time to stand up to the bullies.

They’re adults who are capable of spending their own money on things they claim to value.

4 thoughts on “@GovMarkDayton, The Bullies Want Our Lunch Money for a Vikings Stadium #wilfare”