The Minneapolis City Council seems to be working a bit too hard to redistribute the city’s money to a New Jersey businessman for my taste.

– the overly generous state level financing in the current stadium bill (which Minneapolis residents would obviously be subject to as well)
– the unstable state financing source (pulltab revenues are increasing, and going electronic isn’t going to solve their problems, just like it hasn’t returned lost revenues to newspapers)
– the additional subsidies beyond the cash giveaway such as additional property tax free land, being able to run property tax free businesses on that land, and tens of millions in subsidies in the form of tax-free construction materials

. . . it’s clear that the best thing the city can do at this point is punt.

Here are a few examples of why this is the right move for Minneapolis.

The Metrodome is Paid For

Not only is it paid for, it has a brand new roof and field. While we clearly wouldn’t build a new stadium to the Metrodome’s specs if we were starting from scratch today, we don’t tear down our own homes after 30 years because we’ve only recently paid them off.

The Vikings claim that they’d make more money if they had a new stadium. While playing in a new stadium may help them sell a few more seats and skybox rentals, based on the terms of the stadium contracts, the terms of the Vikings stadium bill make it clear that the revenue Wilf is after largely comes from sources that don’t require a new stadium. For example, Wilf wants to make more money from parking, concessions, stadium naming rights, and have additional businesses on a property tax free piece of downtown land such as a fan store and restaurant.

While the Vikings already use the Metrodome rent-free, it would be far cheaper to renegotiate other terms in Wilf’s favor without going through the wasteful process of tearing down a 30 year old stadium so we can build a new one (with a 30 year lease). Every year squeezed out of the current Metrodome is a win for the public.

For example, let’s assume that the Vikings’ revenue is 10% lower in the Metrodome than if they had a new stadium. Over 30 years, here is what the difference would look like in terms of state revenue: 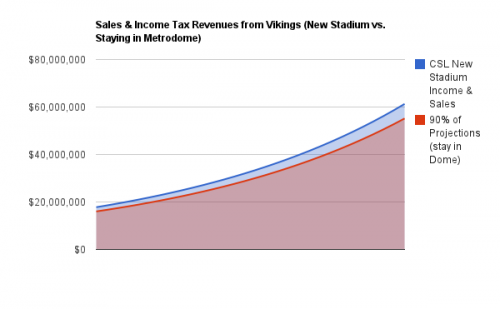 The blue line illustrates what 30 years of sales and income tax revenues from the Vikings in a new stadium would look like, according to their consultants, CSL. The red line shows what 90% of that looks like. Here’s the difference: the blue line is dependent on the public taking on tens of millions of dollars in annual debt payments for decades. The red line depends on continuing to use the paid for Metrodome.

Under this scenario, the public would earn an additional $100 million in sales and income tax revenues over 30 years if we simply borrowed $550 million of the public’s money (before accounting for interest on that debt) to build the team a replacement stadium. Since $550 million is more than $100 million we’d turn every dollar invested into ~20 cents by replacing the Metrodome rather than encouraging the team to continue using the paid for stadium (that happens to have a new roof and field).

If we plug the debt costs into the above chart, we end up with the chart below. The red columns illustrate how much revenue the public would earn from the Vikings over 30 additional years in the Metrodome if the Vikings earned 90% of what they’d earn in a new stadium over that time. The blue represents how much money the public will lose over 30 years. 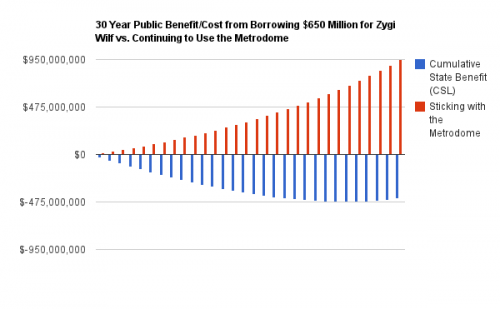 As the blue columns show, the tide starts to turn a bit before year 30, but we still end up in the hole. In fact, the numbers turn into the black a few years before 40. What can we learn from this: keep the Vikings in the Metrodome for as long as possible.

Public leadership that works on behalf of the public works to keep the Vikings in the paid-for Metrodome for as long as possible. This could generate $1.3 BILLION in additional public revenues vs. where we could end up based on the debt burden Vikings stadium bills have proposed. That’s money we could work with to provide additional concessions to Wilf that are far less wasteful than throwing away the people’s Dome.

While it’s unlikely that the Vikings would stick around for 30 more years in the Metrodome, I hope this makes it clear that every year our leadership can convince the team to stay put in their current stadium is a win for the public. Five more years: $240 million revenue benefits.

We Already Have a People’s Stadium

When the term “people’s stadium” is thrown around, it is often used to refer to all of the non-Vikings game day activities a stadium can facilitate. The vast number of those events are recreational and amateur athletic activities that generate little to no revenue such as running, rollerblading, high school and college sports. None of these activities require a new stadium. In fact, they may be worse off after a new stadium is built.

For example, there is no language in the current stadium bill assuring us that the stadium concourses will be available and acceptable for running and rollerblading. And, a stadium built specifically for football is far less valuable as a college baseball stadium. The current stadium bill only requires 17 days out 355 non-Vikings game days of access for the “people” per year.

It’s the Minnesota Vikings. Not the Minneapolis Vikings (but we’re willing to host)

If the state of Minnesota is interested in keeping Zygi Wilf’s ransom demands for a new stadium, Minneapolis should be a good host by letting the state leverage the huge investments that have been made in highway infrastructure and transit options, while also taking advantage of the hospitality industry Minneapolis accommodates since it can make a ton of money for the state. But, it’s not the city’s responsibility to pick up the tab for a state facility.

Frankly, the “partner” for that $150 million should be fans rather than people who happen to live downtown Minneapolis, have a beer downtown, or stay in a downtown hotel for reasons entirely unrelated to the Vikings running their business downtown 10 days per year.

The Stadium Bill is Getting Better, But Isn’t Good Enough

We’ve come a long way in the past 10 months, from a Vikings stadium plan in Arden Hills that would have cost far more than the current plan, and at a truly ridiculous cost to Ramsey County taxpayers. Something like 15% of all sales tax revenues collected in the county would have gone to support Zygi Wilf’s business over 30 years. Crazy.

Locations have improved by shifting to Minneapolis from Arden Hills.

Financing has improved by shifting $100 million in additional burden to the state from a “local partner”.

But, it’s going to take more time to straighten out the other issues with the current stadium bill. Let the state work on this. They have a year. They can do it. And, who knows: maybe Vikings fans and local business owners find their checkbooks so they can help subsidize Zygi Wilf’s business rather than continuing to beg for Wilfare?