Back on January 29th, Carly and I ran my last few blocks of the Shingle Creek Neighborhood, then dipped into Victory. After a quick loop at 52nd, we busted south on Osseo Rd, which took us past G & K Services’s offices. We did not have branded identity apparel needs at the time, so kept running. Looking east from the Osseo Rd bridge, we saw the Humboldt Industrial Park, including the train yard (CP Rail). Coming off the bridge, we were welcomed into the Victory Neighborhood. Osseo Rd took us to 44th Ave, where we passed The Warren (an artist habitat). This is also the home of the Camden Farmers Market in the summer. Across the street at 44th & Penn is Victory 44 Restaurant (warning: auto-play sound). Great food. Awesome burger. They also have a coffee shop next door. Chocolate City Hair Designs used to be Jackie Ann’s Hair Salon. Their site is under reconstruction. As we continued east, we passed the back side of Patrick Henry High School at 44th & Newton. Webber Camden Market, at 44th & James, was in the news lately when the owner, Kevin Aldwaik, explained the regulatory hurdles he’s faced trying to run a grocery store on the north side. North United Methodist Church, at 44th & Fremont, with be turning 159 this year. It started in a log cabin near this site when this was was out in the country from downtown Minneapolis. 44th Ave runs into Webber Parkway just after Fremont. The tennis courts and pool were not getting much action at this time of year. We turned back west on 43rd Ave N, and passed Patrick Henry High School’s fields. The fields were named after Dick Cassidy in 2000 “For his outstanding work with Northside baseball through the years and for maintaining what may be the finest field in the Twin Cities at Henry High School” Here is a better show of Henry HS from the front at 43rd & Morgan. United Christian Fellowship Church at 43rd & Queen, has a Vision 2029 posted that describes missionary work throughout the world. If you’re in the market for a church, it looks like St. John’s Missionary Baptist Church at 43rd & Thomas is for sale. It’s also home to the Victory Neighborhood Association. We eventually reached Victory Memorial Parkway, then headed north. VMP turns at 45th Ave, which is where I took this shot facing east. It didn’t seem like swimsuit weather to me, but that didn’t stop the doll on this We Watch We Call sign. This wasn’t the only interesting sign along Memorial Drive. We then looped through a couple short streets north of Victory Memorial Parkway, which brought us past Ryan Lake (technically in Robbinsdale). We then worked our way back to the Shingle Creek Neighborhood and past this welcoming sign. They don’t go with the neighborhood watch warning style that’s popular in some other neighborhoods around the city. We almost stepped foot in a suburb near the end of the run, but stayed clear. 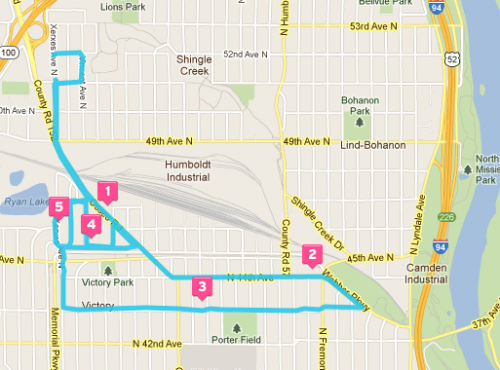