Steve Brandt at the StarTribune has an article up about the progress of repaving in Minneapolis. While Rybak seems to think the city has hundres of millions of dollars for the Timberwolves and Vikings, we also have streets dating back to 1961 in need of some serious work.

The article included a great graphic illustrating the state of our city’s streets: 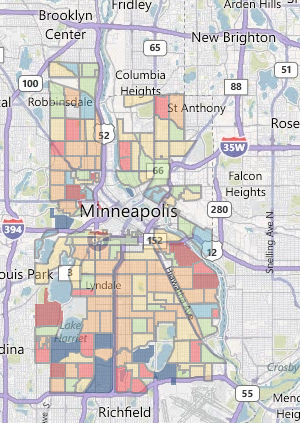 I see the Cooper neighborhood among the list of streets near the bottom of the city’s list (last major work was 30 years ago, and last sealcoat was 30 years ago, which may explain the potholes bike commuters navigate night and day around here).

It looks like the city charges assessments for residential street and sewer improvements (among other things), so I’m curious what that kind of money we’re talking about here. I don’t see any work in my neighborhood planned for 2012 (Linden Hills, Near North, & Armatage and some select streets this year) or in the future yet but I suppose it’s just a matter of time.

Actually, it looks like Brandt providing some insight into the potential cost:

This mill-and-overlay technique costs the owner of a typical residential lot just over $1,100. But at 15 to 20 miles of such work annually, it will take the city 31 to 42 years to resurface all its residential streets, an unsustainable pace considering that the resurfacing is expected to last only 10 years.

I suppose having a corner lot may make this hurt a bit more.