The Vikings punter, Chris Kluwe, has stepped into the Vikings stadium Wilfare debate by calling MN legislators “assholes” for not meeting Zygi Wilf’s demand for more than half a billion taxpayer dollars: 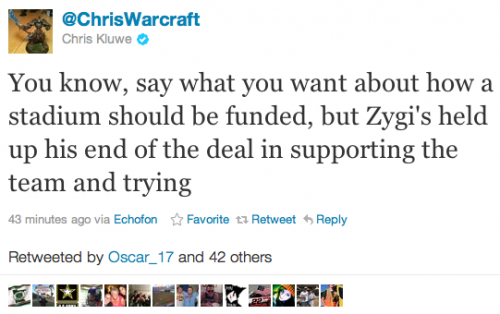 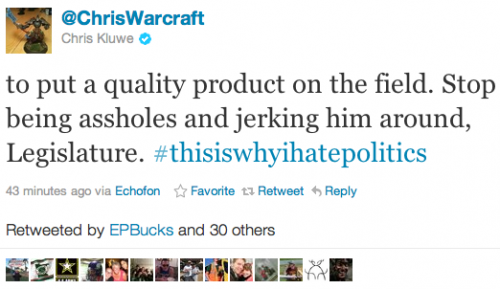 Perhaps Kluwe should try thinking of politics in terms of what’s justifiable. If it was justifiable to redistribute more than half a billion dollars from Minnesotans to Zygi Wilf, it would have been done by now. But, the Vikings have failed to make a case on why it’s in the best interest of Minnesotans to do so. Since the legislators Kluwe called assholes were voted into office by Minnesotans rather than Zygi Wilf, it’s in their best interest to put their constituents’ interest first. You know, the ones who overwhelmingly do not favor having public revenue redistributed to an NFL franchise.

While the average Minnesotan has fewer lobbyists at the state capitol than Zygi, sometimes legislators still manage to do the right thing by putting their constituent’s interests first.

Kluwe’s 2011 salary with the Vikings was $1,422,857, which is 48X Minnesota’s per capita income. While punting in a new stadium at taxpayer’s expense may interest Kluwe, it turns out that the average Minnesotan would prefer to watch him punt in the current or a refurbished Metrodome.

Wilf refuses to pay for even half the cost of a new stadium and Vikings fans refuse to cover the difference between what Wilf wants to spend and what Wilf is willing to pay. It’s not the public’s responsibility to make up for Wilf’s greed and Vikings fans’ lack of financial support for the team.

A millionaire begging for money from thousandaires on behalf of a billionaire feels sorry for me. Touching.

7 thoughts on “Vikings Punter Chris Kluwe: Legislators are Assholes for Not Giving Wilf More than 1/2 a Billion Dollars”