I’ve been banned from commenting on The Daily Norseman website. For what? Reality checking Vikings Wilfare queens, I guess.

Here is the post with comment thread that did me in (PDF): Minnesota Vikings Stadium_ Metrodome Now _Only Workable Site_ – Daily Norseman.

Here are my infringing comments:

Fans just need to find their checkbooks and help Zygi out. For a small 1-time donation of $10,000 per seat, Wilf would have the money he wants to build a stadium wherever he wants, as profitably as he wants.

What’s stopping you from writing a check to Wilf? You have a loyal following. Why not ask fans to pool their money to help increase Wilf’s share of the costs / decrease the corporate welfare demands?

In general, Minnesotans are Vikings fans, but not fans enough to be willing to subsidize the team. Yet, there are plenty of hardcore fans who probably would be willing to pony up some serious cash for PSLs and other forms of funding to create the “game day experience” they claim to want.

BTW, using stupid spending on other things to justify spending money on something this stupid is really stupid. We’d lose nearly half a billion dollars over 30 years if we met Wilf’s corporate welfare demands. That’s bad public policy.

Avoid delays
Pool your money to close the financial gap between what Wilf is willing to pay and what Dayton can get the votes for.

Correct
Fans should be donating rather than demanding forced donations from taxpayers. Green Bay fans did it. Show some pride in your team.

Strong opinion
Back it up with money. That’s the problem that needs to be solved. Tell Wilf to take out a $200 million loan that he could repay through PSLs or jacked up ticket prices.

Check your math
I ran the numbers over here:

It’s a net loser if we meet Wilf’s corporate welfare demands. If the numbers made sense, the Vikings would have the votes. If it was even close, legislators would hold their nose and vote for it. But, Wilf is demanding more money than any NFL franchise in the history of the NFL. More than any sports team in the history of the United States. That’s not going to happen. Thus, the move toward more financially sane stadium locations.

Good reason to write a check
If a team really wanted to be in the Twin Cities market, we wouldn’t have to pay to have them here. It’s a free market. If the NFL benefits from being here, they’re welcome to be here.

If it’s important enough to you, you’re welcome to pay their ransom.

Step up, Fans
Get out your checkbooks. Things are getting serious. Now is the time to show that you care enough about the team and the game day experience to put your money where your mouth is.

There are jobs bills and stadium boondoggles
Claiming that anti-corporate welfare for NFL franchise folks are anti-job creation is a really weak argument. There are people of the far right where that may fit, but there are plenty of people on the left who see a role for government job creation through health care, education, or justifiable construction projects.

For example, Dayton has proposed a $775 million bonding bill that aims to put people back to work while upgrading the state’s infrastructure:

Education may not be as sexy as subsidizing your entertainment, but it creates jobs with a side effect of educated Minnesotans. Bridge repair is boring, as crossing bridges should be.

Converting wasteland
Good point. The land is worth cleaning up.

But, the land would be more profitable if it was reclaimed then used in a way that generates property taxes. Wilf’s plan would have the public own the stadium. Why? No property taxes.

If normal local businesses and home owners developed that land, it would contribute more to the tax base.

Not 10,000 Jobs. 673 Jobs
There may be quite a few people who work on the job site for a few days, but the money would be enough to employ the equivalent of 673 full time construction workers over 3 years. I’ve explained that here:

That’s a lot of jobs, but there are more efficient ways to create that many jobs, and with better side effects (educated kids, healthier people, safer bridges, etc.).

Hundreds of billions of dollars?
The Vikings generate around $21 million/yr in revenue for the state today. They’re asking for ~$50 million/yr in subsidies. See the problem?

Interesting points
But, the numbers don’t add up. If they did, the Vikings would have the votes. Or, why wouldn’t Wilf just finance the stadium privately, own it, and reap all the benefits? Because it doesn’t add up.

The losses would be nowhere near that.
For the net losses in tax revenues to be as high as you suggest, every single dollar that’s currently spent on the Vikings would have to be spent outside the State of Minnesota. In reality, the vast majority of that money would be spend on other taxable things in the state. Perhaps going out to eat a bit more often, attending other sporting events, hunting, vacations, etc.

So, while there would be a loss, let’s try to be a bit more realistic about projections.

It’s not their money
You’re free to spend your own money on things you find valuable. What’s stopping you?

Stop demanding that the government spend other people’s money to subsidize your private entertainment and an NFL franchise’s private business.

If I was to guess, I bet it was my 2nd to last comment that caused Ted Glover to melt down. That comment was in response to this one from him:

They were not hearing what they wanted to hear. It’s a free country. And they can do what they want to do with their site. That said, it’s kind of sad to watch superfans rely upon such bad data to form their opinions about Wilf’s corporate welfare demands and why people opposing those plans oppose them. 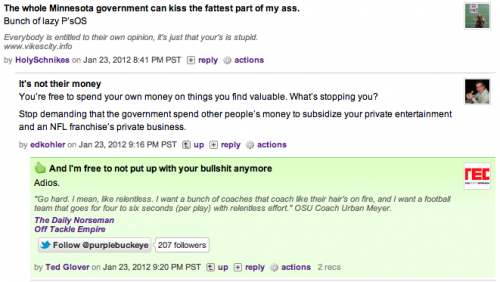 Here is an example of Ted Glover failing at a simply math problem:

So what’s the problem?

The problem is that:

1. Ted is using revenue projections in excess of what even the Vikings project (PDF) they will generate in a new stadium.

I can see how Ted Glover thinks this deal is a good deal based on his irrationally exuberant (mathematically incorrect) assumptions. Luckily, our elected officials seem to have a better grasp on reality than Glover, which is why they haven’t voted in favor of meeting Zygi Wilf’s corporate welfare demands.

As I’ve said before, if the numbers were even close to break even (break even meaning, the Vikings contribute nothing to the state, but at least they aren’t a financial burden to have around), the Vikings could probably find enough legislators who would be willing to hold their nose and vote for a stadium deal. But, Wilf’s demand of more corporate welfare than any team in the history of the NFL continues to hamper progress on this issue.