Here is one idea on how a new Vikings stadium could be funded without raising taxes and without exploiting Minnesota’s gambling addicts for the benefit of an NFL franchise owner. 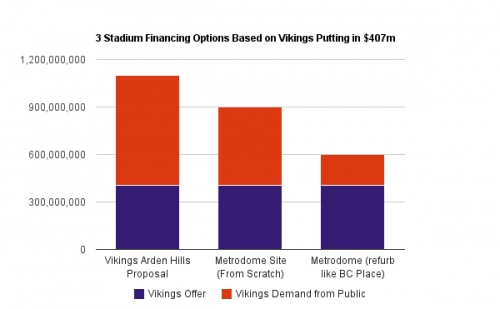 The three listed above are the Arden Hills proposal the Vikings have been pushing. That’s the most expensive option, partly because it includes a 21,000 car parking lot where the other two leverage existing parking lots and transit options. Then there are the two Metrodome site options: tear it down and rebuild from scratch, or refurbish the Dome ala BC Place.

The colors represent the $407 million the Vikings claim they are willing to put toward stadium construction. The far left column, where that $407m represents a sliver of the $1.1 billion cost of the Arden Hills proposal, shows why that’s a non-starter. The red part of the column represents the public share of the deal.

Notice how the red part shrinks to smaller and smaller levels as we look at more sensible solutions. By the time we get to the Dome refurb options, the public cost would likely drop to under $200 million.

But, we can do better than that by asking fans to show their support by finding their wallets. I think there are at least two fan funding options that deserve serious consideration: Personal Seat Licenses and Vikings license plates. 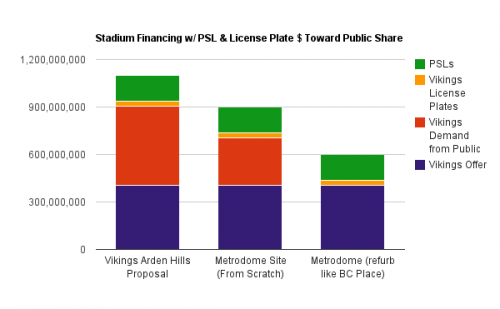 Here are the assumptions:

With those assumptions, look at what happens to the red portion of each column. Under the Arden Hills proposal, the public would still be on the hook for half a billion dollars to help build a 21,000 car parking lot with no transit access. For the Dome full reconstruction option, the public share would drop to $300 million, which could eliminate the need for a local revenue source. And, if the dome was refurbished using the funding sources shown above, there would be no need for any public funding. None. No Wilfare.