Back on December 11th, Carly, Nordica, Kevin, and I ran Morgan and Newton Avenues in North Minneapolis from Hwy 55 to the Dowling and back. We started by heading north on Morgan: This building at 1119 Morgan Ave N was built in 1936 for the Sharei Zedeck Synagogue back when North Minneapolis had a large Jewish population. In 1969, it was sold to St. John’s Baptist Church (a baptist church with menorah’s on the exterior) which used the building through 2007. Now it appears to sit empty. Before 1936, Sharei Zedeck Synagogue was a few blocks east at 726 Bryant in a more ornate building that was razed for the Sumner Field housing projects in 1936.

By the way, Placeography has an excellent Minneapolis Jewish North Side Tour wiki. The Minneapolis Police Department’s 4th Precinct. To get a feel for the action dealt with in this precinct, check out the 4th Precinct CARE Task Force website. After crossing Broadway, we hit Ilion Ave N for a bit. This building was built by Forest Heights Congregational Church in 1908, and purchased by a Liberian congregation, Garden of Gethsemane Ministries, in 2003. It was in rough shape at the time. But, with help from The Ackerberg Group on behalf of Catalyst Community Partners, the church was restored in 2009. Back on Morgan, we passed Minneapolis Fire Station 14 at Lowry. Megan Goodmundson has an action shot of the crew putting out a vacant house fire on Queen Ave N from earlier in the year.

Once we reached Dowling we turned back on Newton. This church at 2827 Newton Ave N appears to be currently the Beacon of Hope Church and formerly Key of Faith Church-God In Christ. The address is also home to CityLifeWorks. This building at Newton at 25th Ave N is home to Jordan New Life Church (Lutheran ELCA) and JNL Hub (2nd building) which provides social services for the neighborhood. The Urban Research and Outreach-Engagement Center, between Newton and Penn at Plymouth, is a University of Minnesota facility for studying and providing community development services. 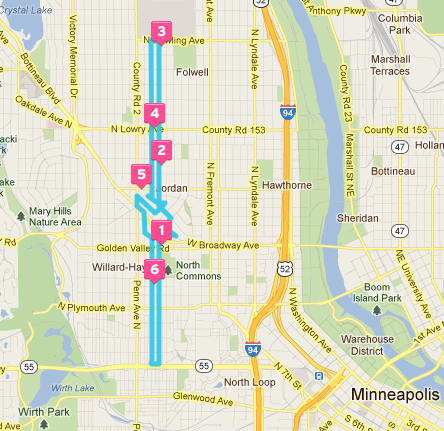 One thought on “Run Minneapolis: Morgan and Newton Ave N”