A few days ago, I called the phone number of an illegal snipe advertisement placed near Hiawatha and Hwy 62. Today, I got a call back after leaving a voicemail. The caller: Mr. Jim Freddie Fowler calling from the number 651-633-0175. I told him that I had called about the signs he has been spamming around the City of Minneapolis. At that point, Freddie hung up on me.

Mr. Fowler appears to work at 2717 Patton Rd in Roseville, MN and live near Blue Moon Coffee in Minneapolis.

The ad Mr. Fowler was “fowling” up the City of Minneapolis with was targeted at people looking for work. Freddie works in “Wellness / Nutrition / weight loss” according to his Facebook profile.

It turns out that Mr. Fowler’s domain name redirects to a company called symmetrydirect.com. I tried to find out some information about this company. The BBB says that their phone numbers have changed: 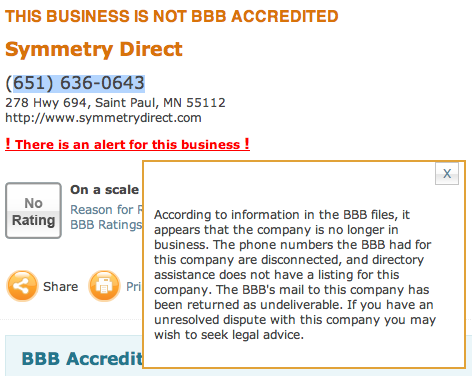 A college student in Bloomington, MN says that his car has been spammed with Post-It notes from Symmetry Direct recruiter. He wrote up his experience with the company on ripoffreport.com.

You are repeating exactly what I went through with these people working at Mac, Inc.
The road is a frontage Northern road off of the Highway in a small business area in New Brighton.
Do you really feel that this is a scam of sorts? If so, then I suggest you call or write the BBB, the Minnesota Secretary of State, and the FTC to file a complaint about the “employment opportunity” Mac, Inc. offered to you to come in for an “Interview.”

In my opinion, Mac, Inc. operates under dubious business practices to lure desparate people to sell or buy nutritional supplements under an illegal chain-referral marketing scheme.

Contact a business attorney to answer your business questions about Mac, Inc.

Do the ads work? Here is what someone wrote after setting up an appointment with the company after seeing one of their signs:

just got an appointment from a Sara telling me to come to 2727 highway 694 new brighton, mn across from a ford dealership on a service road. same story, lower level, i asked the company name and she said Imac it sounded like. the number was 651-633-4312. I got her number off a sign posted in the grass near a 694 exit. I assume now this is a scam ? I have an appointment for thursday.

And there are more complaints about this company on ComplaintsBoard.com.

And even more on RipoffReport.com, including a report indicating that one of the company’s employees (a registered sex offender in Michigan for “Criminal Sexual Conduct – 4th Degree – Victim Between 13-16”) is cold calling people to recruit them.

The same phone number is used to advertise to U of MN students with the following classified ad:

This is yet another reason why it’s worth enforcing the city’s snipe ordinance.