Remember when Minneapolis Mayor, RT Rybak held a press conference to show off three Minneapolis Vikings stadium location concepts, while suggesting that a new sales tax imposed on the City of Minneapolis could provide the #wilfare dollars?

Do you remember how many of Minneapolis’ City Council Members were standing at his side? None.

On October 27th, 2nd Ward City Council Member Cam Gordon made if very clear where he stood on the Vikings stadium funding concepts presented at the time:

I want to make abundantly clear that I do not support any of the current public funding schemes for a Vikings stadium. As you may recall, I did not support publicly funding the new Twins stadium either, and was the only Council Member to call on the County to let Minneapolis residents vote on the new taxes that paid for it. I do not, in general, support devoting public funds to private stadiums.

And now Ward 12 (my ward) Council Member, Sandy Colvin Roy, has shared her thoughts on the concept of forcing the public to pay a new sales tax without a vote: 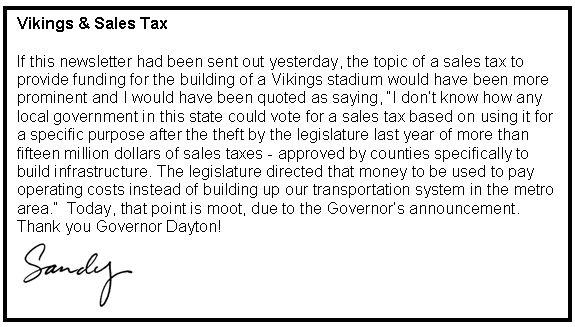 Based on the topics listed on the issues page of Colvin Roy’s Ward 12 site, it’s pretty clear that helping Zygi Wilf increase the profitability of his NFL franchise isn’t at the top of the list.

I think Rybak onto something with the locations he proposed, but forcing residents to provide #wilfare to the Vikings makes no sense to me. Putting a tax increase for Wilf’s benefit to a vote would be fine. I’m sure Minneapolis residents would be willing to share their opinions on #Wilfare at the ballot box.