Update: 20 hours later Pioneer Press has restored the post with the following explanation.

UPDATE: The numbers and mechanics on how to get the tax on the ballot are being disputed by some parties. We are following up on this and will post again when we know more. 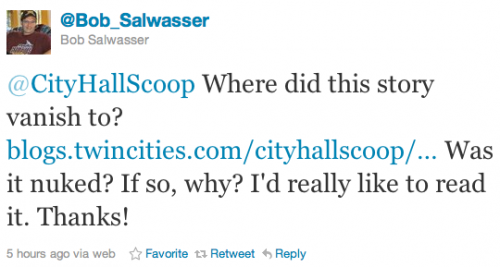 Bob Salwasser noticed that the Pioneer Press deleted a post on their City Hall Scoop blog related to efforts by anti-Vikings stadium Wilfare groups attempting to get a vote onto the ballot to prevent Ramsey County voters from being forces to give $350,000,000 to Zygi Wilf’s business.

While the post was deleted, nothing really goes away once it’s published to the web, so here you go, Bob. (PDF)

Here is an excerpt for those of you too lazy to click a PDF:

If Ramsey County voters still want to get an anti-stadium funding question on the ballot next year, they’ll need just under 15,000 signatures to do it –about half what many had anticipated.

That’s because to get on the ballot, charter amendments require far fewer signatures than voter-driven ordinance proposals. Amendments ask for signatures from 5 percent of the voters in the last general election, while ordinance proposals ask for “10 percent of those who voted for President of the United States in the last general election. Based on 2008 election results, 27,817 signatures are required.”

Andy Cilek, president of the conservative Minnesota Voters Alliance, said his group is ready to start the petition drive.

He said the alliance will submit 500 signatures to the Ramsey County Attorney for review. Once they receive the go-ahead that their petition is in order, they’ll have 90 days to collect just under 15,000 signatures, equivalent to 5 percent of the registered voters in the county’s last general election in 2010.

From the sound of things, even after the Ramsey County Charter Commission failed to protect Ramsey County taxpayers from the 1%, taxpayers can work harder than they should have to in order to protect their right to vote on whether they are willing to have their money redistributed to a real estate developer in New Jersey.