It’s not every day that the Minnesota Free Market Institute and Hillary Clinton find themselves on the same side of an issue. But when it comes to providing welfare to professional sports teams that have gotten into the business of holding fans from cities and states hostage in exchange for hundreds of millions of taxpayer dollars, they reach the same conclusion from different perspectives.

For another example of politically polarized people coming together in opposition to socialist funding for the NFL, check out the retweets of one of my articles that ran on Minnpost: 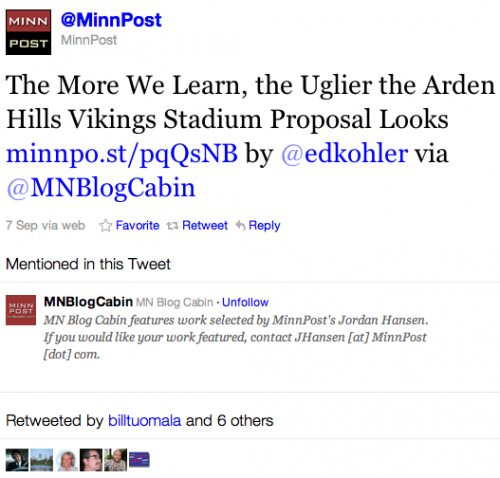 Those avatars are pretty small, so here’s the deal. Among the retweeters of that piece where Dump Bachmann / Ripple in Stillwater’s Karl Bremer and KTLK’s Sue Jeffers. I haven’t met either of them, but Karl comes across to me as a guy who thinks government can do some good for people, but subsidizing NFL business owners, players, and season ticket holders doesn’t make the cut. And Sue Jeffers is a small government purist, so the idea of growing government by an additional $650,000,000 is dead on arrival.

A similar squeeze appears to be happening at the legislature. Politicians who think the government does some good if the priorities are right, and those within government who believe in limited government are bookending politicians who are willing to spend the public’s money without a vote or financial justification.