In fact, Ramsey County Commissioner, Tony Bennett, has gone so far as to say that Ramsey County residents wouldn’t vote in favor of a tax increase for any reason. MPR reported that last month:

“I don’t think you could get a library passed on a referendum. Never mind an ice arena or a playground, if it were the only issue on the ballot. No matter what we put on a ballot today that costs money, I don’t think anybody would look at it,” he said.

However, Ramsey County is the exact same county that voted in favor of the Legacy Amendment in 2008. Here is a heat maps of votes by county from that ballot item: 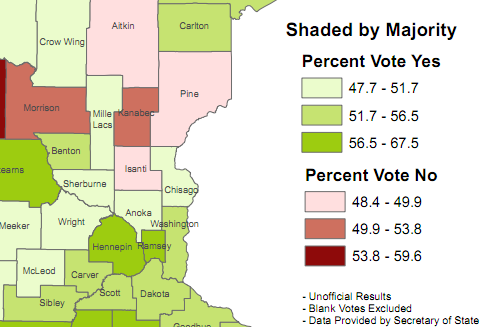 Which tells me that Ramsey County voters are willing to vote to raise their own taxes when they see value in how their money will collectively be spent. Since the sentiment of Ramsey County voters appears to be against providing welfare to Zygi Wilf so he can build a 21,000 spot parking lot with a replacement stadium, people like Tony Bennett and Cory Merrifield are working hard to deny Ramsey County their right to vote on whether their taxes should be raised to financially support the most profitable sports entertainment league in the United States.