Documented liar, Cory Merrifield, went on a bit of a Twitter rampage calling me a coward for, apparently, documenting some of his lies and asking whether we should trust the guy. 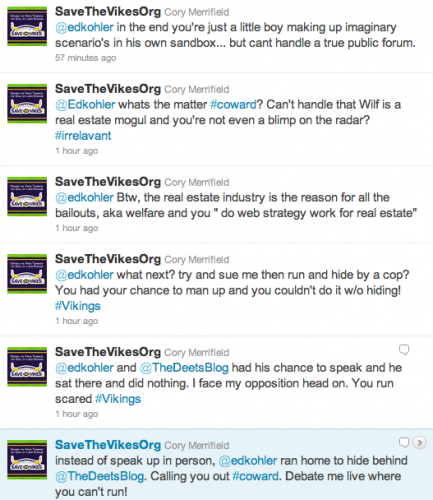 When it comes to Cory’s coward accusations, he’s not exactly lying, but there is a misunderstanding here that he’s based his assumptions on that are causing him to spread an untruth.

I was at a meeting before heading out to New Brighton, so I arrived late, signed in quickly, and hopped inot the meeting. It turns out that the sign-in sheet I signed wasn’t a general public sign-in sheet, but a sheet to sign up to have a chance to speak. Beyond that, it was the sign-up sheet that only Ramsey County residents were supposed to use, since Ramsey County residents are given first dibs at speaking at Ramsey County meetings. Once they’re done, outsiders such as welfare queen lobbyists like Cory Merrifield get 2 minutes to insult the local community.

If Cory Merrifield had been paying close attention he may have realized this, since my name was called during the Ramsey County resident public hearing portion of the night, then quickly retracted by the moderator when he read the Minneapolis address next to my name.

The moderator did circle back to call my name once the post-Ramsey County attendees were given a chance to speak. But, by that point, there really was nothing left to say beyond what had been said over and over and over again for more than two hours: Ramsey County residents deserve to have their right to vote honored, and only Wilfare queens like Cory Merrifield could possibly disagree with that.

If you don’t think the sentiment of the audience was already clear without 2 minutes of mic time from me, look at the reports from the meeting:

Cory, if it makes you feel better inside to call me a coward while you’re out begging for $650,000,000 in public subsidies for a 21,000 car parking lot in Arden Hills (along with a replacement stadium) for an NFL team, go for it. But, don’t expect me to forget that you’re a documented liar.

13 thoughts on “According to Documented Liar, Cory Merrifield, I’m a Coward”