lease vs. buy equipment calculator excel how to get flonase out of system viagra samples from doctor priligy buy in india is it bad to go on and off lexapro prednisone cause costochondritis thambi arjuna full movie watch online
Skip to content

I had a chance to attend the Ramsey County Charter Commission’s public hearing tonight in New Brighton, where the public had a chance to share their opinions on whether the charter commission should authorize a vote on an amendment to the county’s charter to specifically call for no public dollars (current, or through new taxes) be spent to fund NFL or MLB stadiums.

The short-term ramifications of this would be a potential hurdle and even road block in Zygi Wilf’s plans to build a 21,000 car parking lot with stadium in Arden Hills. The hurdle being the delays caused by the vote. The road block being the likelihood of the public wisely voting in favor of denying NFL and MLB public funding.

A handful of Vikings Wilfare supporters showed up to speak in favor of denying Ramsey County residents the right to vote on whether their tax dollars should be used to support private professional sports entertainment. They were severely outnumbered by Ramsey County residents, people on fixed incomes, and people who understand that the current proposal for a Vikings stadium in Ramsey County is a bad investment for Ramsey County.

Here is a look at the crowd: Now, here’s a funny thing about Cory Merrifield that was reinforced for me tonight: The dude will make up blatant lies. As in, no grey area. Just straight up lies out of thin air. Here is an example.

Coincidentally, Cory Merrifield appeared to realize that I was there a bit after that, based on this tweet that he sent at 7:19 PM: 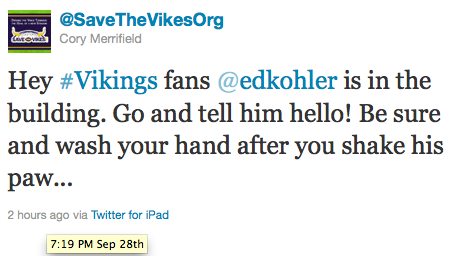 Which brings us to this tweet from Cory Merrifield at 8:09 PM:

The real deal here is that I stood where I stood because it gave the best view of the speakers. It’s also where the TV cameras were posted. The photos I took were taken from between two of the local TV station’s cameras. Put another way, I was standing at that location far before Cory Merrifield tweeted to his stadium welfare buddies who drove in from all over the metro to attempt to get Ramsey County to ignore its own charter in order to give Wilf the Wilfare he’s looking for.

But, it gets better. Cory Merrifield also tweeted this:

Mom & Dad, is there something that you haven’t been telling me? Does Cory Merrifield know something that I don’t know about my family’s financial situation?

Joel Ives from Prince Edward Island, who I had a chance to drink some beer with in Edmonton last weekend, chimed in with his take on my trust fund status: