The Minnesota Vikings’ Vice President of Public Affairs and Stadium Development, Lester Bagley, recently penned an editorial, published by the StarTribune, where he infers that we must be stupid. Bagley claims that a map of the proposed Arden Hills Vikings stadium location that has been shopped around to cities for approval by Ramsey County officials closely tied to the Vikings organization – a map that included convention center to the north of the stadium – is just a bunch of hooey.

While there are plenty of reasons to suggest that Bagley is doing the best he can to backpedal in the face of common sense, the convention center nugget is just one of the issues that Bagley is being forced to twist words to explain on behalf of Vikings organization. For example, Bagley also made this comment in his same editorial:

The reporter made reference to the Wilfs’ development plans near the stadium and used the phrase, “Wilf’s ideas are so grand as to merit the nickname ‘Zygi World,'” which is unflattering at best, but more important, is simply not true.

There are no grand plans for the Arden Hills site? That’s what the Minnesota Vikings’ Vice President of Public Affairs and Stadium Development, Lester Bagley, wrote down and put his name to in the largest newspaper in the State of Minnesota, so we should probably just take his word for it. Never mind that the Vikings’ most loyal water carrier, Ramsey County Commissioner, Tony Bennett has been emailing city after city asking for their blessing on a proposal that includes, among other things, a convention center. Here is exactly what Tony Bennett has pitched to multiple cities, such as Arden Hills, North St. Paul, and St. Paul:

“The Vikings stadium development envisions a stadium, convention center/hotel complex, and corporate campus, and does not include residential property.”

That sounds pretty darn specific to me. Somehow, I guess we’re supposed to suspend reality and assume that Tony Bennett has been planning and pitching what Zygi Wilf plans to build in Arden Hills without actually talking to Zygi Wilf. It seems like that’s what it would take for us to be able to take Bagley at his word.

Moving away from the convention center issue for a bit, perhaps Lester Bagley could explain how the map below reconciles with his StarTribune editorial statement “it’s simply not true” that there are plans for a “Zygi World” in Arden Hills: 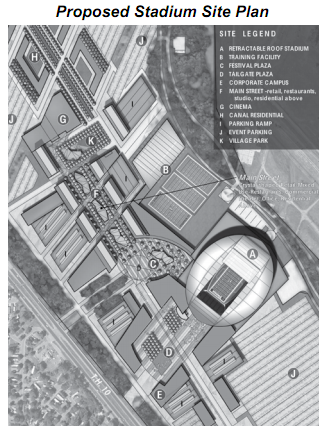 That map is from the June 2011 issue of the Arden Hills Notes, which is “The Official City Newsletter for Arden Hills Residents”.

In case Lester Bagley isn’t a regular reader of the Arden Hills Notes, here is a larger, color version of a map “Zygi World” map which he claimed in his StarTribune editorial “it’s simply not true”. Perhaps the NFL – Minnesota Vikings logo will help refresh his memory? 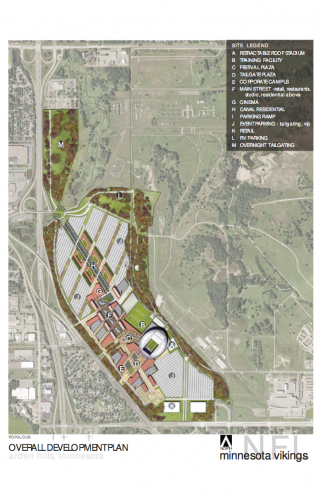 This version shows an even broader perspective of the “it’s simply not true!” (Lester Bagley, September 2011) “Zygi World” plan. Overnight tailgating? An RV Park? Seriously? Would wants to pay good money to sit next to a Vikings fan who’s coming off an overnight tailgating bender at the Vikings campground or RV park? Are you interested in subsidizing that experience with $600 million in public money?

Lester Bagley, when given free range in the StarTribune to give the Vikings’ side of the proposed Arden Hills Vikings proposal, claimed that “it’s simply not true” that Zygi Wilf is attempting to build a “Zygi World” in Arden Hills. Which makes me wonder: if the maps above don’t describe a “Zygi World” what would it take for that plan to be a Zygi’s World? Unicorns?

It’s worth noting that the plans above conflict with the plans that Ramsey County Commissioner and #1 Vikings welfare supporter, Tony Bennett, has been attempting to sell to cities in Ramsey County. For example, he sent the following email to the City of Roseville asking them for their support: 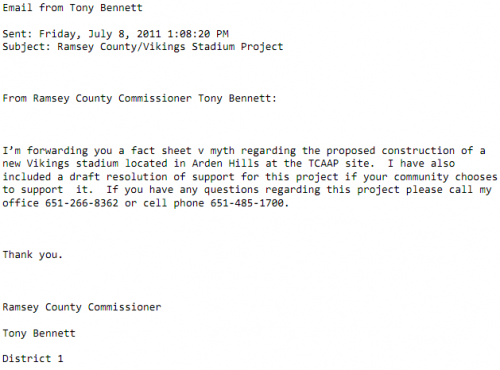 The attachment to that email described the Vikings’ plans like this:

One of the advantages to the Arden Hills site is available space and opportunity for related development. The vision for the area includes a convention center/hotel complex and a corporate campus, in addition to the stadium. This additional development will provide construction jobs for many years.

The Vikings stadium development envisions a stadium, convention center/hotel complex, and corporate campus, and does not include residential property.

Tony Bennett was busy promoting the scrapped-residential / added-convention center version of the plan on July 8, 2011, according to the date stamp on the materials he sent out to cities in Ramsey County. The reworked map that likely complemented the plan Tony Bennett was attempting to sell would be the one that Rochelle Olson reported on for the StarTribune. Here is how she described it in the article that freaked out Vikings welfare supporters, including Lester Bagley:

Another circle to the north of the stadium parcel was labeled “Potential Corporate Campus.”

A circle north of the stadium? In the area that was marked “residential” but was likely changed to something else once Wilf realized that residential was a dead end? Purely coincidental, Lester?

To me, it sure looks like Rochelle Olson had her facts straight in her original article and Lester Bagley and the Vikings organization tried to make her look like a fool. It would be very interesting to see a copy of the map that included the convention center plan. I’d like to know the date that was created, and whether it has the NFL – Minnesota Vikings logo that’s found on the color one above.

If Lester Bagley had really wanted to use his StarTribune editorial to create a #LetsBeClear moment like Corry Merrifield from @SaveTheVikesOrg THINKS Bagley made, all that Bagley really would have needed to say, but didn’t, is this: “The Vikings will never build a convention center in Arden Hills.” Not that they don’t currently have plans. Or, didn’t have plans in the past. Just lay the issue to rest by taking it completely off the table.

Or, Bagley could have done this: Provide the public with a map of the current Vikings plans. He didn’t do that either.

Mr. Bagley, if you’re honestly asking the public to borrow more than $600 million, with interest, don’t you think you owe the public a precise explanation of what your plans for our land and money? I know accountability can be a pain, but that’s the cost of attempting to do business with other people’s money.