The more I look at Vikings stadium welfare supporters, the more I see a grassroots coalition of fake Twitter accounts.

For example, doesn’t it seem kind of strange that @VIKESSTADIUM protected his tweets at the same time “Jim Bratz” started defending @VIKESSTADIUM in the comments of this blog?

Perhaps that’s because @VIKESSTADIUM is “Jim Bratz“, who is “fan advocate” Josh Hewitt (and also appears to be @DubbsTravel & Jeremy Woods on Twitter).

Josh Hewitt has a history of setting up fake Twitter accounts to help lobby for welfare payments to Zygi Wilf.

“Jim Bratz” comments on The Deets from the IP address 65.28.54.72, which appears to be from someone using a RoadRunner internet connection in Wisconsin.

If I Google that IP address, Google brings up a forum post written by a guy named Josh:

This is the same Josh Hewitt that peppers politicians on Facebook and Twitter, claiming that they somehow won’t get reelected if they don’t give hundreds of millions of dollars of welfare to Zygi Wilf so Hewitt can one day watch the Vikings play football in a new stadium:

This is the same Josh Hewitt that @savethevikesorg’s Cory Merrifield endorses.

To get a sense for how pathetically militant Save the Vikings fans like Josh Hewitt are, check out this example:

That’s Josh Hewitt retweeting a tweet about me that he first posted to @DubbsTravels then retweeted via @VIKESSTADIUM.

At the same time, @DubbsTravels started tweeting from an account called @MNState0fHockey:

That particular account was banned from Twitter’s search results due to Josh Hewitt’s offensiveness.

Actually, a whole bunch of Twitter accounts started retweeting each other around the same time: 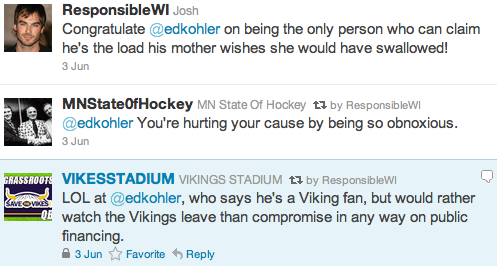 Could that all be coming from the same Josh Hewitt? Check out the content of the forum post where I tied Josh’s IP address to Deets commenter, “Jim Bratz”. Look at what he posted:

One may ask, are you sure this is the same guy? It seems like he’s both in Minnesota or Wisconsin. Well, normally I don’t run background checks on commenters, but in this case, I made an exception. Here is where he’s lived: 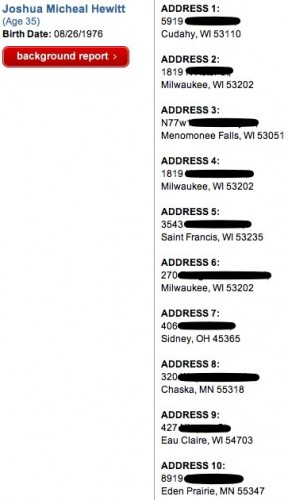 He’s an Eden Prairie High School grad who appears to be running his fake grassroots social media spamming campaigns from somewhere near Milwaukee.

Now that we know who “Jim Bratz” is, it’s interesting to see what we can learn from re-reading his tweets on The Deets. For example, here’s a gem from my post titled: “Josh Hewitt Uses Fake Twitter Account to Defend @SaveTheVikesOrg”. Jim Bratz’s comment: 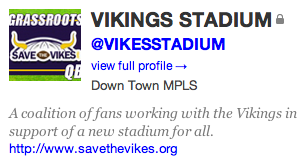 So, Josh, are you going to continue to create more and more fake Twitter accounts in order to create the illusion of a grassroots organization in favor of welfare for Zygi Wilf?