If you were going to build a business in Minnesota that relies upon 60,000 people coming to visit you once a week for 8 weeks, where would you put it?

Perhaps in a location with easy access to all major highways, with plenty of parking, and lots of transit? One might thing.

But, if you could put it out in a distant suburb, you could profit from everyone having to drive, then park in your lot. Better yet, you may be able to get the public to subsidize the majority of the costs for construction and road upgrades. Quite a deal, if you’re willing to be a welfare queen.

What difference does 10 miles from the center of our metro area with poorer access to highways and transit really mean? I’ve attempted to illustrate that with some maps that look at commute distances over a fixed time from both locations.

First, driving from the Metrodome vs. the Arden Hills site:

The red markers represent the stadium. The purple circle is a 30 mile radius from that point, but the green polygon is the more important variable. That’s an estimate of how far you can realistically expect to drive within 30 minutes from each point.

So, to read this, take a look at what communities fall within the green polygon with the Dome site vs. the Arden Hills site. As I see it, there are some winners and losers here:

Of course, the real losers from a drive time perspective are everyone south of the proposed stadium location. Especially those who were able to take transit such as the LRT, North Star Rail, or one of the many buses that service downtown Minneapolis. To get a feel for that, here is a breakdown of transit based commute distances achievable within one hour, according to Mapnificent.com:

[UPDATE: Peter H. pointed out in the comments that the Mapnificent visualization above is not based on weekend transit patterns.]

Clearly, there are some transportation advantages to placing a stadium at the intersection of the state’s major highways, along the current LRT, the next stretch of the LRT (to downtown St. Paul), and next stretch of the LRT beyond that (through the western ‘burbs to Eden Prairie), and the Northstar rail, and future rail plans, and dozens of bus routes.

Or, we could provide over $600,000,000 (plus interest) to subsidize the relocation of a business to a distant suburb where the transportation plans are to build 21,000 parking places, and enhance the roadways to handle peak traffic 8 days a year.

Out of Town Visitors

Where are the largest concentrations of hotel rooms in the Twin Cities? Count the red dots: 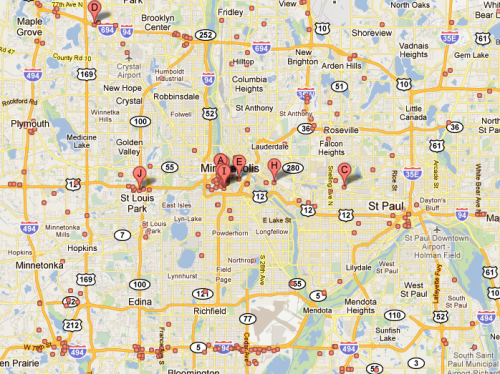 Many of those locations offer hotel shuttles or are on the LRT, which means that those visitors to our community don’t have deal with the time and expense of renting a car. Now, move the stadium to a car dependent location far from where they are staying and their costs (time and money) of attending a game skyrocket.