Minneapolis 2nd Ward City Council Member, Cam Gordon, recently blogged about the new Minneapolis Bike Plan which outlines what we have today and where things should head in the future. There are some great ideas in this plan. It looks like some solid work went into putting this together, and I hope the plan is taken seriously as roads are reconstructed in the future.

The full plan can be found here.

I snapped a shot of the Longfellow portion of the city map for discussion. Here that is along with the legend: 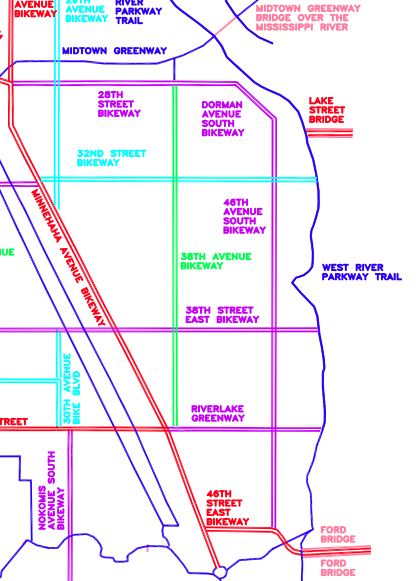 I think the 46th Ave S / Dorman / 28th Street bike path improvement is a great one to have on this list. 46th is a major thru-way for bike commuters who really are trying to get from point-A to point-B rather than meander along West River Parkway, dodging leisure cyclists, runners, and dog walkers.

I’ve lived on 46th for 7 years now, so know a little something about the traffic behavior in the area. One challenge the street faces is dealing with cars that treat it as a major thoroughfare. 46th is the first N-S running street west of the Mississippi that runs all the way from the Ford Bridge to Lake Street, and it seems to attract people from places like Highland Park in St. Paul who cross the Ford Bridge then blast their way through residential streets. I get the impression that part of this is due to the design of the street. On the southern part of 46th Ave S, from 46th Street to 38th Street, the street is quite a bit wider and is a bus route. This was also a streetcar route back in the day. But, the streetcar turned west at 41st, then worked its way north again on 42nd Ave S. Unfortunately, car drivers don’t seem to play by the same rules as street cars or bus routes. Car drivers seem to continue at the same pace even after the street gets narrower, making things more dangerous for people getting in/out of cars, and, of course, bikers who suddenly have less room to work with between parked and driven cars.

So, should 46th Ave S get a bike-friendly upgrade, one consideration should be to attempt to steer car drivers back onto the wider thru-way streets. That would be better for cyclists continuing on 46th, and for residents living on the narrower streets further up 46th, like me.