The Deet’s blog is upset because I follow Black women who work in the entertainment industry. The guy’s name is Ed Kohler, look him up.

That one didn’t get a reply, but it did seem to generate a response (although it could be coincidental). Don Allen has protected his Twitter account. That means that only people who currently follow Don can read his Tweets, see who he’s following, etc. Should you want to join, you now have to be accepted into Don’s exclusive club. 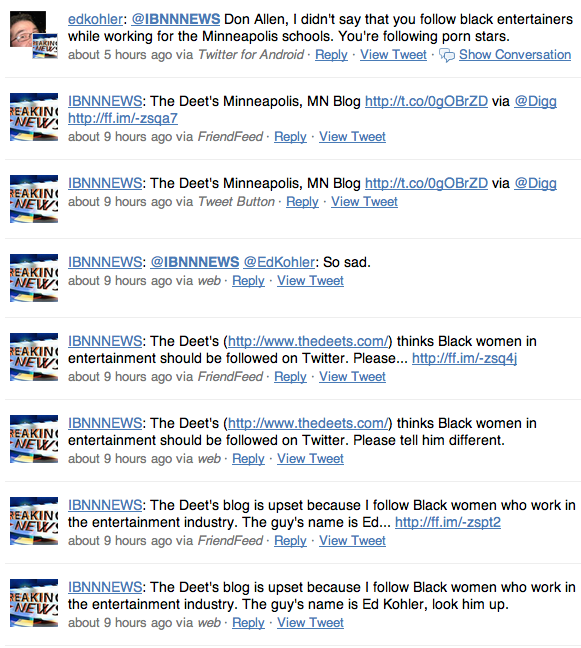 2. Wrote this comment here, where he kind of but not really explains his brilliance:

There’s nothing to hide. Mr. Kohler is elementary at best. He knows nothing about viral marketing. He seemed like a good guy, and again, I can show him how to bring traffic to his blog in overwhelming numbers – the best thing is, I wouldn’t charge him a nickle.

3. Makes up a ridiculous racist statement about me that doesn’t connect with reality and posts it to his Twitter followers.

Don also called me to talk about this. I didn’t take his call at the time because I was sharing a 2-top table with a gentleman who was kind enough to share the only airport restaurant table with an outlet in STL Terminal 2. Don, I may have time to catch up by phone on Friday.

I think I’m going to take a break from blogging about Don Allen. While every post generates an interesting response, they’re not the types of rational responses I was hoping to see.

For example, most people, when you document that they’ve made up a lie about a member of the community (like Poopgate) will correct their mistake. I’ve blogged about this one and even talked to Don in person about this. I don’t think he’s going to correct his blatant lie.

Most people, when you point out legitimate concerns about things they’ve written, podcasts they’ve recorded, pictures they’ve posted, and videos they’ve published, won’t assume that you’re doing so for blogging revenue. Most people would assume that someone trying to make money from blogging would write about topics of broad interest that would trigger lots page views serving high revenue ads. Neither of those factors exist with this topic.

Most people, when presented with a sound argument, will react with a rational response. But not all people.

That’s what I’ve learned over the past six weeks. What has Don Allen learned? I don’t know.