If there was one thing that makes me question the financial viability of online media businesses, it would be the differences in revenue generated by visitors to websites who use Microsoft’s Internet Explorer web browser, vs. the rest of the planet. 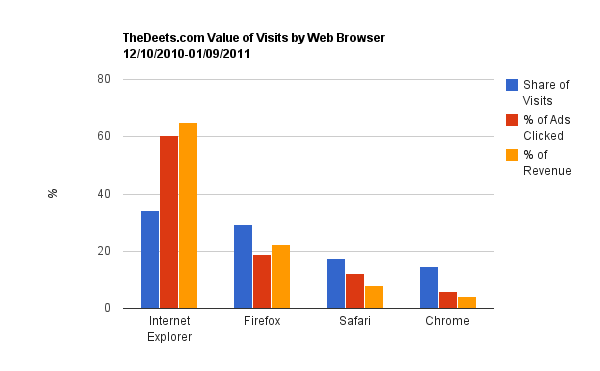 Visits via Internet Explorer are down to 34% of visits. FireFox is at 29%, which is a bit of a drop too. Safari has gained a bit, but Chrome is making the biggest gains.

While IE web browsing visitors account for only 34% of TheDeets.com’s traffic, those visitors are responsible for 60% of the ad clicks and 65% of the site’s revenue.

At the other end of the spectrum, Chrome web browser users, I see a 14% visit share, and a measly 4% share of ad revenue.

If you’re trying to make a living off online ad revenues, this could be problematic. As I see it, the IE crowd is likely people who’ve bought a Windows computer and have stuck with their computer’s default web browser (along with people who are forced to use IE on work computers). I’m assuming that this group of web users are relative novices compared to people who’ve taken the time to install a different browser (Firefox or Chrome) or buy a better computer (Safari is the default Macintosh browser).

Breaking down the advertisement click through rates by the browser choices of visitors, I see this: 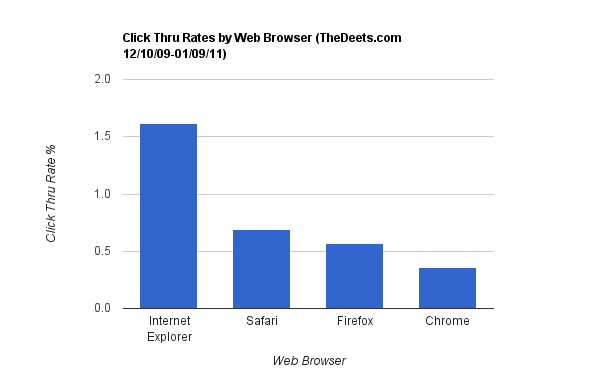 The challenge here for publishers is that more and more people will fall into the Safari, FireFox, and Chrome profiles over time as they become more experienced web surfers. Then who’s going to click the ads?

As I think about this, it reminds me of the experience I have whenever I visit a new country for the first time. After landing at an airport, everything is new, including the advertisements. I find myself actually interested in the ads in subways, on billboards, bus benches, etc. But, over time, my interest wanes. I imagine this is partly because the ads become relatively redundant over time. I don’t have the same level of engagement with a cell phone carrier’s ad the 100th time I see it. But, it’s not just the content of the ads that gets ignored. It’s whatever appears in locations that have proven to provide little value over time.

Translating that to the web, people who’ve spent a lot of time online have seen a TON of ads, so are already familiar with a huge portion of the ads they peripherally see every day. Additionally, there are certain locations on pages, and shapes of content that their brains have learned to ignore since they have proven to provide little value. And, beyond that, a small portion of experienced web users have installed ad blockers, so don’t even have to ignore the ads on the page.