Ryan Lyk has been pretty quiet on Minnesota Democrats Exposed lately. Apparently, his time has been taken up with Tweeting about watching and rating video games on YouTube: 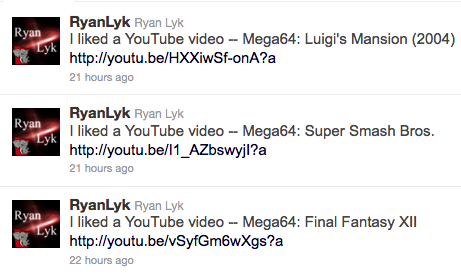 He recently found time to take a break from his video game watching and rating activities to act outraged about an algorithmically served ad on MNPublius. As I understand Lyk’s post, he’s outraged that an ad served by Google AdSense onto MNPublius was inappropriate. Here is what Lyk saw: I think it’s pretty safe to assume that no one affiliated with MNPublius proactively served an ad like that next to a story condemning the vitriolic rhetoric of people like Michele Bachmann and Sarah Palin. In fact, it’s safe to assume that the ads served next to that article will vary based on who visits that page of MNPublius.com. For example, take a look at the ad Google served to me when I visited: Then I switched browsers and visited the same page to see if I’d see a different ad: I switched to a third browser: How dare MNPublius serve ads for shoes, software companies and non-profit organizations to a guy like me. Who do they think they are . . . or, who does Google think I am?

Who DOES Google think I am? The kind of guy who buys shoes, software, and has been visiting sits like Kiva lately, so may have an interest in hosting an exchange student?

And who does Google think Ryan Lyk is? Not a shoe or software buying non-profit perusing guy like me, I guess. Strangely, when Lyk shows distaste in the ads served to him, he’s actually showing distaste at his own tastes (as Google sees them). Looking into the mirror can be a real buzzkill.

The point here is that Google takes a ton of variables into consideration personalizing advertising to individual visitors. This includes a visitor’s location, language settings, and browsing history.

Try it yourself. Visit the story on MNPublius and see what types of ads Google serves to you.

While on the subject, I’d like to thank Michele Bachmann for her financial support of The Deets through her Michele PAC advertising:

I think we can all agree that Michele PAC’s money is best spent advertising on The Deets. Coincidentally, Ryan Lyk was outraged last week about elected officials buying online advertising in support of political agendas. I if his outrage applies to Michele Bachmann, or only to politicians he disagrees with?

5 thoughts on “Thanks you, Michele Bachmann, for Your Financial Support”