Here is a beautiful example of how Minnesota Democrats Exposed managed to take the balance out of a fair and balanced story.

Andy Post wrote a post on MDE on the 31st titled: “DFL Legislator Series: Top Per Diem Takers in MN are all Democrats” in which he acted shocked and appalled that, in a year when the DFL was in the majority of both the House and Senate, they also had members with relatively high per diems.

Here’s the fun part: The source for Post’s story was a December 23rd article in Politics in Minnesota. That story’s title: “Per diems a bipartisan affair”

Wait a minute: As Post wrote it up, it sounded like this was a example of Democrats being exposed. Isn’t that the point of MDE?

If I assume that Andy Post read the entire piece before blogging about it, and is a capable reader, I have to assume that he cherry picked a fair and balanced article in order to create a misleading story.

Regardless, I did my part to help inform Andy by posting a paragraph from the Politics in Minnesota story as a comment on his site. Here is the snippet: 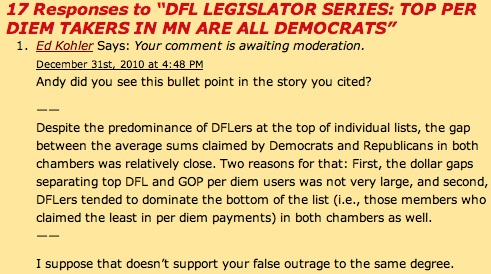 That tells a very different story than what Post mislead his readers with. And, not surprisingly, my comment was removed from Andy Post’s post on MDE. How dare I point out, within the comments on Minnesota Democrats Exposed, that Andy Post is misleading his readers.

Now, let’s assume that Post simply chose to cherry pick a story that’s accurate (top per diem takers were DFL) but misleading. While misleading, it wouldn’t be untruthful. However, Post went further when he wrote this on MDE:

Unfortunately, the PIM headline that the issue is “a bi-partisan affair” is somewhat misleading. The per diem is only “bi-partisan” in that people from both parties have taken per diem at all.

Writing like that makes me question Andy Post’s integrity, since he is actively fighting against cold hard facts to make his misleading point. For example, check out this nugget from the Politics in Minnesota article Post called misleading. I’ve bolded out something that I found interesting:

Do you see what I see? House Republicans took home more money in per diem payments, on average, than DFL members of the house.

Andy, I truly believe that you can do better than this. With all due respect, you should try harder to avoid being so embarrassingly inaccurate in your writing.