One of Tom Emmer’s trackers (the people who stalk Emmer’s opponents on the campaign trail with video cameras), Abby Michaud, seems like quite a character. Here’s her LinkedIn history: 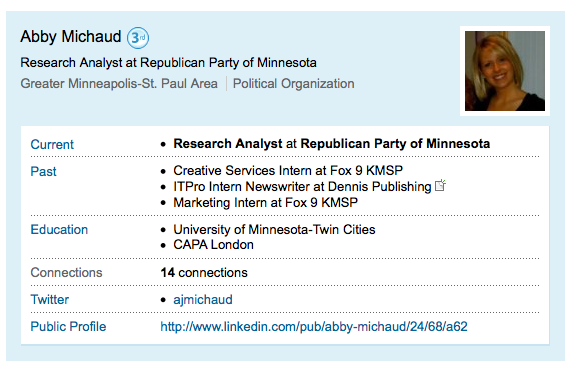 Which does seem like a more accurate description than Research Analyst.

(She doesn’t use her name on her Tumblr site, but she did link to it from her Twitter account where she did use her real name.)

I can’t say for sure whether the following post was written by Abby, since it sounds like she shares the blog with at least one other author. However, at the very least, she’s let is stand since January: 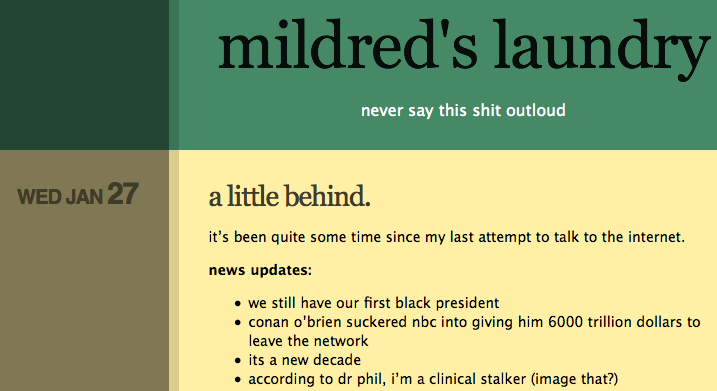 Perhaps they should take their “never say this shit outloud” advice and apply it to writing on the web as well?

I asked Abby via Twitter whether she was the self-described clinical stalker author who wrote that racist comment. 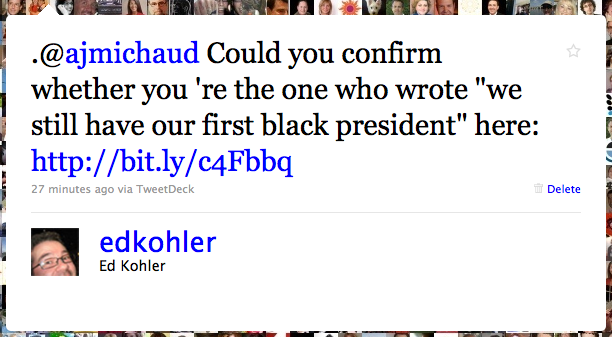 Coincidentally, Abby Michaud’s blog disappeared less than 15 minutes after I questioned her about that.

Since she doesn’t seem to be comfortable standing behind her own words, she deleted the blog entirely. So here’s something fun. Guess who runs mildredslaundry.tumblr.com now? I do. My first post is up with the screenshot of Abby’s racist comment.

Seriously people, take Abby’s advice on this one: “never say this shit outloud”. Better yet, be a better person.

So now we know a bit more about who the Minnesota GOP hires to hassle Emmer’s opponents on the campaign trail. I hope Tony Sutton realizes that he has a problem when his trackers are becoming the story rather than his candidate. Unless, of course, his candidate actually benefits from not being in the news. Considering how often Tom Emmer has already managed to put his foot in his mouth, that may actually be the case.