I’m sure a lot of you have already tried Groupon, based on the emails I receive from friends passing along offers that they find particularly interesting.

For those of you not already familiar with the service, it’s a new spin on couponing where the service posts one offer a day (on their website and via email) for a local business. But rather than being a coupon offer, it’s a heavily discounted gift card, so you need to pay up to earn the offer.

Examples of this have been things like $50 restaurant gift cards on sale for $20-$25. Spas, skydiving, and cosmetic dental services.

On the plus side, the offers have been surprisingly local. I was hesitant to sign up for this because I figured it would be overrun with national chains that I tend not to go to, deal or not. However, that has proven to be not the case.

The metrics of Groupon are intriguing. For example, Tiger Sushi on Lyndale at the Midtown Greenway ran an offer to purchase $45 gift cards for $20. This was one of the most popular recent deals. 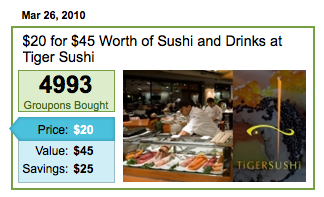 I assume this is because it was for more than 50% off and in a popular part of town where Groupon likely has solid traction.

Money in the bank is certainly a good thing. But what happens if all 4,993 of those Groupon purchasers shows up to redeem their gift cards? The ~$50,000 Tiger Sushi earned comes with the promise of being willing to fulfill $224,685 worth of tabs. I’m not intimately familiar with restaurant margins, but that seems like a pretty large exposure to me.

However, the numbers must make sense, since Groupon is kicking butt all over the country with this model. If the offers weren’t working for businesses, word would get around fast and the wind would be gone from Groupon’s sails.

To make this work, the following likely happens:

1. Acquiring new customers: Take a loss on the first visit, but earn a new customer in the process. This virtually guarantees that you’ll get new customers in the door.

2. Over-spenders. A tab at a sushi place will likely run well beyond $45. If it doesn’t, you probably will know why by the next morning.

3. Spoilage. A substantial number of Groupon purchasers probably never get around to using the gift cards they’re purchased. This is obviously the highest margin side of this equation for the vendor.

What else do you think is in play here?

Could a Truly Local Version Work?

Assuming the numbers make sense, it would be interesting to see if this would work locally with local control. For example, what if the Lake Street Council pushed out daily or weekly offers on behalf of local businesses? Primary subscribers to offers like that would likely be people nearby, but it may be the thing that puts them over the top to invite friends from faraway places like St Paul or Linden Hills to see what Lake Street is all about these days.

Hmm, along the Lake Street brainstorming flow, how about local businesses offering deals to groups that can prove they brought people into the neighborhood? If you’re from zip codes 55406, 55407, or 55408 and can prove that you brought at least two people from elsewhere to the venue, you’ll eligible for something rad. Try it and see.