Dennis Geisinger has a great update on the state of graffiti in the City of Minneapolis a year after latest graffiti law went into effect where stores selling graffiti supplies (aka spray paint) had to lock up or post “We ID” signs.

The lowdown on the fight against â€œtaggingâ€

According to a review of recent posts in local issue-oriented websites and a quick run-down of recent city statistics, the jury may still be out. The number of total graffiti cases processed by the City in 2006 was 17,566, dropping 23 percent in 2007 to 13,442.

Last year, almost twice the number were on public property, 8,664 cases compared with 4,654 on private property. Out of the total, 4,467 property owners did their own cleanup. The top 10 neighborhoods with reported graffiti last year were all in South Minneapolis, with the Whittier neighborhood coming in No. 1 with 842 cases. Powderhorn was 2nd with 789, Central had 751, Lowry Hill 647, Marcy Holmes 554, Seward 388, Midtown Phillips 356, Standish 331, East Phillips 309 and Longfellow 291. Spray paint locked up at Home Depot in NE Minneapolis

Along East Lake Street, the addition of new murals has definitely helped. There are walls to the West of Hiawatha that used to get hit almost weekly but have been graffiti free since murals have been added. There are also quite a few buildings that have been rehabbed with fresh exteriors that seem to be less graffiti prone. The buildings on the South side of Cedar & Lake come to mind.

Of course, there are still problems, including the still-standing Baraka Rugs / Gustavus Hall building at 17th & Lake. That thing has to go now.

One other area I think the city should consider addressing is graffiti on publicly placed private property. By that, I’m referring primarily to newspaper boxes from companies like the StarTribune, classifieds boxes including those from Employment News, and pay phones from Qwest. 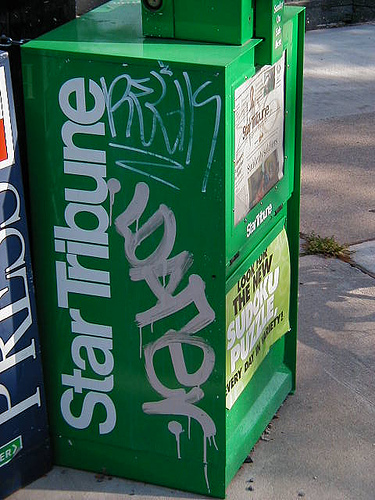 Companies need to take more responsibility for their public-facing property. Residents of the city should not be responsible for cleaning graffiti off business’ private property placed on our street corners.

To me, it seems ridiculous that companies are able to visit their property to drop off fresh newspapers or classifieds (and retrieve money from machines) yet can’t find time to touch up any tags that may appear on their property.

I guess what I’m asking is for public-facing businesses – whether retail establishments, drop boxes, or pay phones – be held to the same graffiti removal standards. If your property gets hit, you have 10 days to remove tags. In the case of the StarTribune, that’s 10 visits to a graffiti tagged newspaper box without removing tags before you’ll be fined.