Preface: I swear that I’ll stop writing about stupid things that Target does as soon as they stop doing stupid things. Perhaps I hold Target to a higher standard than other companies? At this point, I think it’s the misalignment between Target’s positioning as the do-gooder, family-friendly, cooler alternative to Wal-Mart that leads to issues when they misstep.

They also seem to be hyper-sensitive about their brand. They decide what’s cool. You buy it. No questions asked. They don’t seem ready to engage their customers unless you call paying kids to say nice things about Target engaging. While their brand is clearly phenomenal, things like this chip away at their mystique in a world where everyone – not just mainstream media – is a publisher.

On with the show:

Paul Schmelzer has a report over on Minnesota Monitor about a mother, Amy Jussel, who’s offended by a billboard put up by Target in Times Square. She happens to have a blog and asked Target to comment for her blog on why they chose to run this particular advertisement. However, they’ve chosen to snub her.

Here’s the billboard in question: 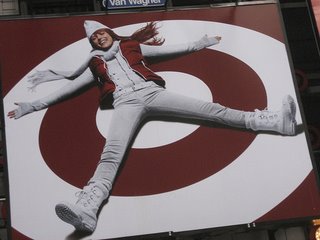 Here is her concern, as she posted on her site, Shaping Youth – a forum for media & marketing’s influence on kids:

Taking Aim at Target: Think That V is a CoinkyDink?

This ad may not be QUITE as blatant as some of the other spread-eagle ambient billboards weâ€™ve featured or as viral as the onslaught of Axe videos making the rounds, but itâ€™s subliminal to the point of guffaw.

That sounds like a reasonable judgment of a company that positions itself as family friendly.

As Paul summarized, Target told Ms. Jussel, a blogging media analyst, that they wouldn’t talk to her because she didn’t represent Target’s core audience. (Check the comments on Shaping Youth for more deets.) How strange is that?

Maybe Target doesn’t really understand the issue? I mean, why would a mother take offense at a billboard with a bullseye on a woman’s crotch?

Perhaps switching genders will help explain the issue. Here are two shots Target is welcome to use in future billboards, gratis: 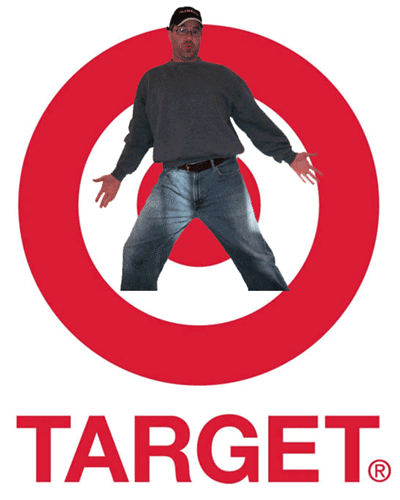 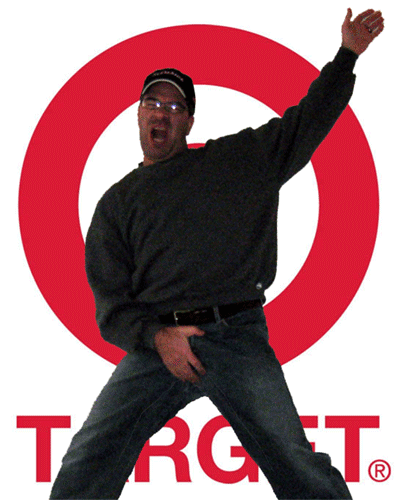 Now I’m starting to understand why Ms. Jussel was offended. Heck, I’m offended when I look at myself spread out over the bullseye.