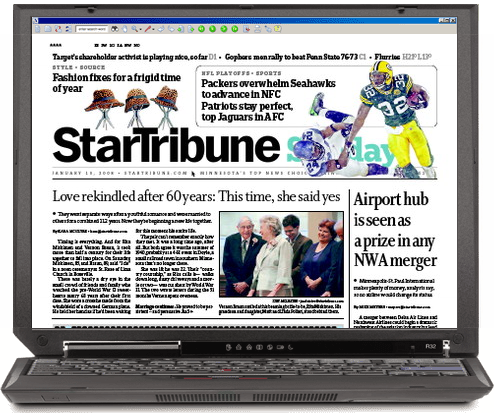 Take a look at the front page of the Sunday, Jan 13 2008 edition of the Minneapolis StarTribune. This shot comes from the eEdition, which is an electronic version with a print layout.

Lead Story: Two 80-year-old’s got married. Nice story, but should this really be the lead story? In my opinion, absolutely not, but I’m just one reader.

Below the fold: a proposal for universal health care in Minnesota by 2011. Holy crap! Everyone in Minnesota could have health insurance four years from now? That’s serious news!

Personally, I think this is a better format for ranking headlines since it makes people aware of things that cost money. It’s not to say that every story on the homepage isn’t interesting or well written. It’s simply tells me where my money is going.

A large section of the front page is devoted to a story about online scams. It sounds impressive when they mention that there are $5 billion in online scams per year in the United States. Yet it really only comes to $23/year per person.

Realizing that less that $12 per month per Minnesotan could provide health insurance to all Minnesotans puts things in an interesting perspective.

Another interesting sort would be by health risk. How likely are you to die from the subject of each story? In the case of the stories listed on this particular day, this doesn’t really apply. But it would work well on a metro section’s crime page. This one may apply more to local TV news, where fear seems to be the key to ratings. Give me a sense of how likely I am to die in a random act of violence at 3am in a part of town I’d never be in at that hour.

This type of sorting in a print edition would obviously be difficult without a major culture shift, but doing it online wouldn’t be all that difficult if newspapers broke out costs as separate fields in their CMS.