There are certainly wackos on all ends of the political spectrum, but I think there is something special about right-wing wackos. From my perspective, the right wing seems to be better at things like blind obedience and unjustified respect for authority, which leads to things like this.

The chart below comes from a web analytics company called Hitwise that measures how traffic moves around the web. They noticed a ridiculous spike in traffic to Mrs. Field’s Cookies website and decided to investigate. The interesting thing in the chart is that Google, which is normally the top referring site from just about every site on the web, has dropped to 6th behind a bunch of web based email programs.

The 3rd result is the one behind it: 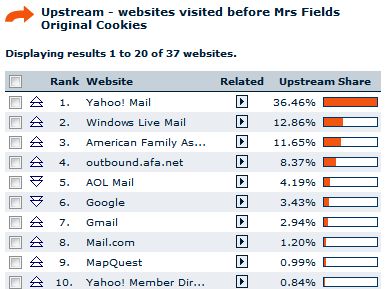 The America Family Association sent out an alert to their members telling them about an issue that was on the front line in the war on American families. What was that? A rumor was going around that Mrs. Field’s Cookies was no longer selling Christmas Cookies:

A little Internet searching revealed the source of this mystery. Apparently, according to this story, a Michigan woman, called a Mrs. Fields to order Christmas cookies. The company representative gave her inaccurate information according to a later statement from Mrs. Fields that, the store was no longer carrying “Christmas” cookies. An email blast was issued from the AFA site. Mayhem ensued. Mystery solved.

Apparently, the biggest issue facing American families today is the availability of cookies labeled as “Christmas” from a mall store. The troops were rallied for this?

A quick glance at the Mrs Field’s website reveals two things. Can you guess what they are? 1. Christmas Gifts are available through the link on the lower left corner on the homepage.

2. It’s not even Halloween yet.

The reason I say this is specifically a right-wing thing is the left is way too disorganized to dwarf the traffic coming into a website over something this trivial. It takes a special kind of blind obedience of your members to pull this off.