I had some fun contributing to a story about Least Dangerous Game with Aric for a FOX 9 News segment on Friday night. 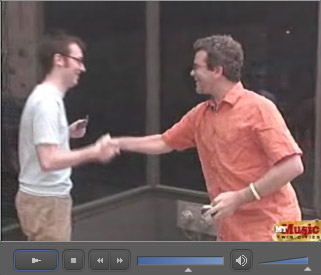 Here’s a link to the video.

It was a pleasure to meet FOX reporter, Dawn Stevens. Overall, I think she put together a great summary of what the game is all about, and in incredibly fast time. I stopped by The Local for a couple beers after the shoot near the IDS, then started receiving text messages from friends while I was wrapping up a later dinner at Mission. I’m sticking to my theory that TV personalities look better in person than they do in their bio-page photos.

There was no need to rush home to watch it, since we don’t have a TV, but thanks to the good old Internet, I was able to catch it tonight.

It looks like one of Hannah’s tweets made it into the screen shot of my Treo on the FOX 9 site. The other two are from Aric, who’s saying, “I am am pretending to send out clues while they tape me. Neat.” and Ang, with, “Settled for tomato soup and Triscuits. Jealous?”

I could go for a Triscuit right about now.

I’m pretty darn sure this is the first time I’ve seen the word, “masturbatory,” on a newscast. It shows up when they pan over the About page of the LDG site.