Whenever a sex offender flier is distributed, I always wonder why they don’t provide a bit more information about what the person did so I have a better feel for how concerned I should be. As the system works now, it’s something less than the color coded alert system George W. Bush uses to scare people into voting for him (how many alerts have you heard about since the 2004 elections?).

Today, I received a flier about a sex offender who’s apparently moving from near the burned out for years but still standing Baraka Rugs building on E Lake St & 17th Ave S to near Matthews Park in Seward.

The flyer gives the offender’s name, but no hints into what type of sex crime he committed to get on the list. So, I looked it up on the Dru Sjodin National Sex Offender Public Registry. 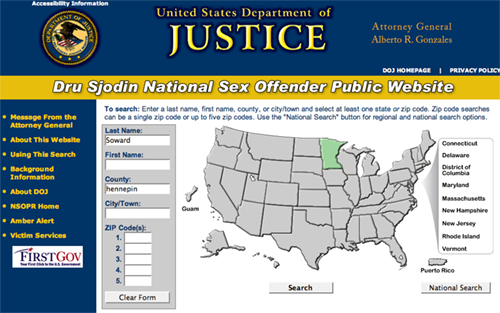 It turns out that this particular dude broke into a home and raped a 17 year old girl.

Now that’s the kind of information I’m looking for. Victim didn’t know the criminal crimes are much scarier than victim knew the criminal. Your neighbor could beat his wife every day without being a threat to you, but if your neighbor’s daughter is raped by a stranger, it’s in a different league.

I’ve never been to one of these meetings, and don’t think I’ll be able to make this one. If you’d like to see what it’s all about, head over to Matthew’s Park on April 16th at 7pm.