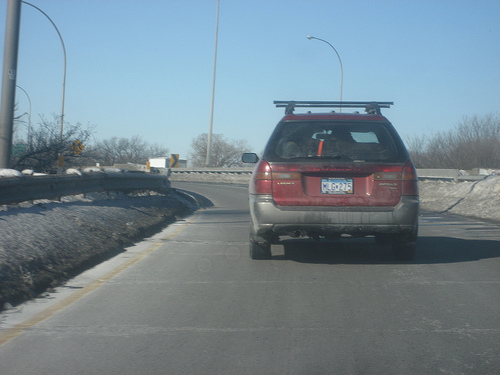 I took this shot on the Crosstown heading Westbound this morning just before merging with traffic from 35W South. The station wagon was really putting along (even compared to my Saturn), and while waiting patiently behind it, I noticed a yellow bag on the roof that appeared to be attached to the roof rack. While studying the bag, then the dogs is the back of the wagon, I realized it was a bag full of fresh dog poop.

The driver was probably coming from the dog park near Fort Snelling off Hiawatha.

It was really whipping around, so I thought it was attached to the roof rack. I started to figure that the poop’s owner (or person responsible for the poop) had tied it to the roof rack so he could dispose it of at home (why not at the dog park wasn’t clear).

Well, it turns out it WASN’T attached, or at least not very well. It flew off the roof and landed smack dab in the middle of the road. I wanted to swerve, but there wasn’t anywhere to go, being on the ramp transitioning from 62 to 62/35W.

I hit the poop.