A loyal Deets reader sent over this story about Home Depot’s proposal to build in the Midway area of St. Paul along Pascal at I-94. Home Depot has previously proposed building at Lexington and University but the city asked for too many concessions from HD, so they pulled out of the deal. I think the city made the right call on the previous deal since Lex & University is a relatively high pedestrian area, making a hardware warehouse a poor fit.

This time, the location is along the frontage road to I-94 at Pascal, pictured below (link to Google Map here). 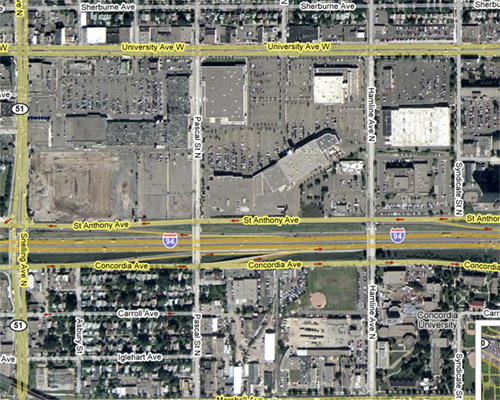 The corner in play is on the North side of St. Anthony Ave (frontage road) and to the West of Pascal St.

This time, however, Home Depot has proposed a transit-oriented design that might win over some of those earlier opponents.

Rather than create a surface parking lot, Home Depot has proposed building a parking ramp and putting scores of parking spaces on the store roof, said Corinne Tilley, a St. Paul zoning official.

The roof parking could help defuse criticism from proponents of the Central Corridor light-rail line proposed nearby.

“If they’re trying to do things that are transit-friendly, then I’m all for it,” said City Council Member Debbie Montgomery, who learned of Home Depot’s site plan Wednesday morning.

That sounds like a smart design change. Put that together with the less pedestrian intensive location along the freeway and things start looking pretty good. Another nice thing is drivers will be able to get on and off the freeway without clogging up traffic (or causing pedestrian conflicts) along University Ave.

The area in question became even more vacant in recent years when Metro Transit removed and demolished their service garage at the corner of St. Anthony and Snelling.

This quote didn’t connect with me at all:

But [Brian] McMahon said a home improvement store doesn’t fit with the sort of transit-oriented development the city has sought for the area. “You’re not going to carry plywood and two-by-fours on a light-rail line or a bus,” he said.

I’ve owned a home for going on three years now, shop at Home Depot on a regular basis (usually the Quarry location because they have hot dogs), and have NEVER carried a piece of plywood or a two-by-four. But I do buy plenty of spray paint, light fixtures, cabinet knobs, house plant, and seeds, which can very easily be carried on a bus or LRT. In fact, Home Depot has a store in Manhattan, where you can be sure nobody is pulling up in SUVs so they can stock up on 2×4’s. Home Depot simply changes their product mix to meet the demands of the local market.

7 thoughts on “Home Depot in Midway area of St. Paul?”