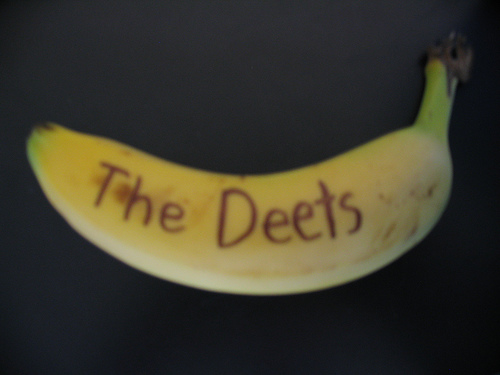 The Deets, originally uploaded by edkohler.

I’ve been getting questions about bananas showing up in the Flickr photos on The Deets. Questions like this:

The banana pictured above was an early effort tested on myself with a black background. After only a few tries, I realized a white background would be a better choice because people would probably want to share their banana names and most people have white rather than black backgrounds on their web sites.

However, shooting pictures of bananas on a white surface isn’t exactly easy because of shadows. To deal with the darn shadows, I built a banana photography studio in the basement while Carly was sleeping one night. The studio basically bounces light around in a foam board cube so the bananas aren’t lit directly, thus reducing shadows.

Ben of Bencredible.com then stepped in to help write a batch processing script for Photoshop that would tweak the contrast and brightness to knock out any remaining shadows.

So, what’s the point? I write stuff on bananas and take pictures of them. People like seeing their names on bananas.

If it still doesn’t make sense, check out the About section over on Banana Name for more Deets.

3 thoughts on “What’s with the Bananas?”